On " How to make our models more physically-based"

These reflections came after having read the discussion paper of the same title by Savenije and Hrachowitz (S&H) on HESSD, and I offer them to your own thinking (their paper was very successful in rising my interest, then). So first, read the opinion paper.

“In brief, our hydrological system is alive and has a strong capacity to adjust itself to prevailing and changing environmental conditions. Although most physically based models take Newtonian  theory at heart, as best they can, what they generally miss is Darwinian theory on how an ecosystem evolves and adjusts its environment to maintain crucial hydrological functions. If this active agent is not reflected in our models, then they miss essential physics. “

However, let me divagate on their concepts and ideas, and debate first, the concept of what Physics is (related to modern Hydrology). In the wide, general sense, Physics is the study of nature, however, it has codified during the last centuries, since Galilei, as a science that uses experiments to validate (I know the danger in using this verb) some theoretical issue about the behavior of some phenomena. One key aspect of Physics is the the word experiment, which means that we have something to measure (a physical quantity) and tools to do it (instruments). Repetition of experiments and confirmation of outcomes, and establishing (mathematical) relations among quantities, brings to laws, Physical laws.
I am aware that each one of the words in the paragraph above would require a book to be dissected, analysed in its historical development, and in fact this was done.
Physics and or “Physical Sciences” have evolved to specialise people. Someones are inclined to work on the theory, others to design experiments. Theory, in turn, means that there is some formal (meaning following unambiguous rules to process statements and precise definitions) language that expresses relations among things, quantities, the latter being closely related to what is measurable (i.e. to the ability to build tools to detect something). The entanglement between theory and measures (or the possibility to do some measurement, even in a “virtual” or “thought” way, or with tools that are not existing but can be conceived) is inextricable.

So when Peter Eagleson  claim for hydrology as a (separate) physical science, I believe he meant that  there was the technology for implementing measures and a “corpus” of “mathematics” to be able to process and forecast hydrological facts, and doing it properly.

During its history, Physics has changed and enormously expanded its field of interest. Galilei started with the motion laws, and continued with planets, attitude that Newton brought to a first completion. Optics came in, then electricity, electromagnetism, quantum mechanics, quantum electrodynamics, chemistry, thermodynamics, to name a few areas.

The lighthouse, were always the “mathematical” approach in describing the world, and repeatable experiments to confirm the findings, and development of mathematics and of measurements techniques went along with it.  Besides,  another reference were conservation laws: mass, momenta, and energy (charge, and so on).

So we can say that hydrology is a physical science, for instance,  also because it uses mass conservation law. In this sense, any of models presented in the paper by S&H are physical.  However,  a judgment on their assertions can be obtained by asking which is their “mathematics” and what do they measure. 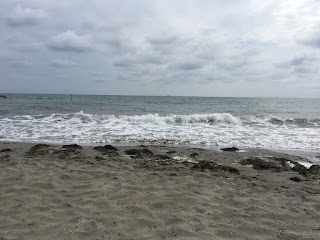 If we accept the beginning phrase, according to its Authors thinking, we should become more physical being more “Darwinian” too. However, Darwin was, as everybody knows,  a biologist^2, or better, maybe, a "natural scientist".  I believe the Authors are right when they claim it but Schroedinger, in his “What is life”, was more concretely a physicist facing biology and his claiming that the approach of Physics could be applied also to life offers a strong counterexample that the Physics approach can be applied to Natural sciences, maybe pushing beyond the present limits the actual science. His work was inspirational for many and can be inspirational even now for doing research in hydrology. With its obsolescence, it is a gigantic conceptual contribution, and I suggest my students to read it, to get the fundamentals of what arguing about Physics is.

Going to some detail, S&H seem to claim that the hydrosphere obeys a homeostatic behavior, which seems to self-regulate and affect earth as much as possible, to maintain the conditions that sustain life. This is reminiscent of the Gaia hypotheses^3.  The difference in scale from hillslope hydrology to the global earth should be taken into account though.
Furthermore, I think we have some realistic hints that the system (Gaia) can be broken, and therefore, I believe, that the evolutionary conditions that the many claim to be a possible guide to build new paradigms of models are valid under the assumption of a certain degree of equilibrium, that is far from being evident in this climate change era. In other words, the hydrological cycle and the ecosystems could be out of balance.
In any case, homeostasis can exist if feedbacks, which physical models should be able to capture, exist. Where is the mathematics for doing it ? I am not sure that arguing by adding reservoirs could be enough to capture intertwined behaviors, but, I admit, they are a starting point (I already kind of wrote it).  Frankly, I think the way inaugurated by Ruddel and Kumar is much more visionary and we should push on that side of research, instead that sticking only with a trial and error (remove and put) guided by uncertain measurements and weak modeling abilities. IMO, future is in network mathematics not reservoirs assemblage.

S&H cite Aristotele, and they have good reason for doing it. Our hydrology is, maybe,  a physical science but often we can just observe the phenomena, not control them, as Galileian experiments would require. So we are lame in our trials, and immersed in dim light, not exposed to the full splendor of the Knowledge. Statistics is necessary to to disentangle measures and observations. Causal relations are often less than obvious, and as all we know, "correlation does not mean causation". All this fuzzines makes the matter prone to exciting but ineffective narrative  that usually starts with the word “holistic” (BTW a word I like too) and continues by saying that “the whole is more than its parts” but  most of the time does not continue with a proper fomalisation of what  "holistic" is and how this damn “whole” can happen. So maybe, he was very wise Galilei when he said to his Aristotelian antagonists “Io stimo più il trovar un vero, benché di cosa leggiera, che 'l disputar lungamente delle massime questioni senza conseguir verità nissuna. ” (I like more to find a truth in a small subject than discuss long time of general subjects without obtaining anything”)

I think that an interesting working hypothesis is that "the whole is the sum of its parts and the interactions among the parts", and that part of the quality of the system, seen as a whole, derives from parts' interactions and feedbacks. A system is itself a quite unidentified entity, and its definition is certainly recursive, meaning that, most of the time, a system is a system of systems, and reality is “stratified”.  But having a "basic system" at some scale should be feasible.

Finally, where is falsification ? Falsification is certainly a characteristic of a scientific enterprise, and therefore of Physics. Certain theories seem to me missing of the precision needed to obtain a proper falsification, and S&H should be more convincing on that side. On the contrary, Pete Eagleason book, Dynamic Hydrology, probably the best book ever in Hydrology, after fourty five years is “all wrong”, the right sense of wrongness. That’s science, that’s Physics !

P.S. - Another attitude I would not spread (S&H are affected) is to see remote sensing as an “oracle” which gives the right answer without paying debts to uncertainty and unknownness. I already wrote about.

^ GEOtop is one of the few notable exceptions.

^2 - I remind an ironic slides by Per Bak with written: "is biology too difficult for biologists ?" Here the worth of retaliation hits.

^3 About the Gaia hypothesis an eminent colleague said “ … Are they testable ? Are they useful ?“ (IMHO:  useful, they were …)