Sandro passed away last sunday for an heart attack. He was 76. As many knows, I due to him my being here in this field. 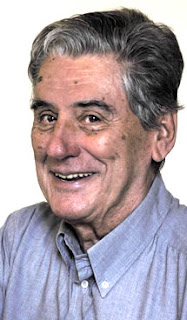 After my master in Physics I had a grant for working with him to "Statistical Models of the Quality of the Atmosphere of Venice Lagoon". Apparently far from Hydrology. But not in the mind of Sandro who looked at the diffusion processes from a geometrical point of view. He believed,  after reading Mandelbrot works, that diffusion patterns could be understood better with fractal geometry. However, to understand these patterns we had to visualise them: and what better than rivers networks ? In fact,  river networks could have been thought, in his view, as a "reverse diffusion" pattern from which we could learn a lot. From diffusion patterns therefore we moved to study hydro-geomorphology, and published together with Andrea Rinaldo the paper: A note on fractal channel networks. Others arrived a little before us on the subject (e.g. Tarboton et al., 1988, and La Barbera and Rosso, 1989)  but Sandro path was quite independent, and the "discover" that the flow-path distances (i.e. the width function) have a multifractal statistical structure was ours.
He was always intrigued with geometry being the inner explanation of many phenomena and therefore his interested in the geomorphic unit hydrograph (Rodriguez-Iturbe and Valdes, 1979, Gupta et al., 1980) was natural. He saw in it both the mathematical way to fit geometry into equations, and as a theory suitable to generalisations for coupling water flow and nutrients transport (and diffusion). His work on the Mass Response Function with Andrea Rinaldo (Rinaldo et al,1988) was decades in advance with respect to the interest that eventually was raised on the topic.  I believe that also Geomorphological dispersion was quite an achievement that can be listed in the "gemoetrical" effort. That work reflected the idea that, at catchment scale, geometry is as much or more important than flow dynamics to produce the form of the hydrograph.

He was a man of innumerables ideas and initiatives. Always in advance of times (maybe too in advance). The School of Environmental Dynamics at IVSLA founded with Andrea Rinaldo was the field where many of us met with science not simply with hydrology. Any edition had an eye to new insights and paradigms (the recent editions were organized by his son Marco, and maintain the same standards and vision). How much I miss those times!
In his effort to promote modelling, he  around the end of the eighties organized a "modelling connection" among environmental scientists, hydrologist , geophysicists, economists, urban planners. The most exciting guys of the Universities of Venice who met for talking about quantitative modeling.
Some colleagues choose the particulars or the details of a discipline: he chose to look at the whole ! Ideas, ideas, ideas. That he was.

As everybody can realize, my recent work has been strongly influenced by working with him. What else was building JGrass, if not giving body to Sandro's vision about processes representation and  the idea that spatial explicit modeling  was necessary for any environmental problem? What else is my commitment with modeling frameworks like OMS3?  What else is my recent involvement with thermodynamics?

He used to say: "Models are wrong ? (Sbaiemo coi modei ?) We do mistake by doing models. (Sbaiemo.) But let's imagine without! (Ma figuresemose sensa!). We should then rely just on qualitative arguments, of ignorant people, based on unformalised belief ?"

Sandro I'll miss you.
Posted by About Hydrology at 11:47 AM No comments:

I received from Madi Di Leo  the news that a lot of Italian cartographic data are available at the geoSDI web site. The data that can be found at:

Data contain at the moment 2500 layers of information and are free. There are also a couple of videos to let people to know how to use the web site. Unfortunately, for foreign,  all information is in Italian, so far.

R is my statistical software of election. I had hard time to convince my Ph.D. students to adopt it, but finally they did, and, as usually happens, many of them became more proficient than me in the field. Now it seems natural to use it for everything, but this was not always the case. A list of introductory material is here.

A nice series of video tutorial on R was just posted by the Google Developers Group, on youTube, here.

New: Now we also have a very informative paper at HESSD: "Using R in hydrology: a review of recent developments and future directions" by Slate et al., 2019. It is a pity they do not cite this blog, but we cannot pretend too much!
Blogs about R and Hydrology

Time series Analysis (among the many others):
A miscellany of topics:

In R there are also many toolkit for the analysis of extreme events. The basic is:
but also:
can be useful.
Frankly I did not test them all: but usually CRAN packages are really good.

Finally, Mauricio Zambrano suggested also a series of other CRAN R packages that could be useful:

R for hydrology is a blog dedicated to activities related to hydrology performed by using R.

If you arrived here and you never used R, you can start from here.
Finally, you also would like to know why it is so hard to learn R. This blogpost clarify it, and also why I am using other languages for real model development.
Posted by About Hydrology at 7:06 PM 45 comments:

With the aim to help people to run GEOtop and understand a little more its code, and having a preview of what its port to C++ means, I and Mountain-eering organized a three days workshop with a few people interested. This is possible a seed for workshops for a larger audience.
The speaker was Matteo Dall'Amico, a former Ph.D. student of mine, and at present one of the owners of Mountain-eering. 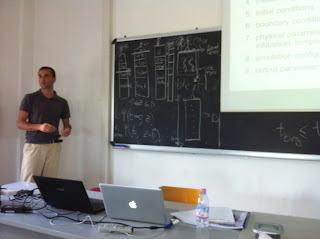 The workshop  provided to participants the key information necessary to disentangle the complexity of GEOtop's use from the scratch: from its installation on the different platforms (Linux, Windows, Mac), including its compilation with the gnu compiler,  understanding its discretization scheme and the input data,  running some template example, working with SVN.  There was also some little theory, especially about snow (but you can refer also to an older post for the theory and some is also contained in the GEOtop History- Part I and Part II).
The slides of the three days can be found here.  However, they do not contain the full information, and should be used as an index of the thing to look for becoming really GEOtop proficient.

CUAHSI youtube and the recent conferences at the biennial meeting

CUAHSI is the consortium of Universities for the advancement of hydrological sciences (my university is a member). Every two years they have a very interesting meeting. I was invited to participate to the 2008 meeting, and I could not attend in 2010 and 2012. However, the plenary sessions are now on-line thanks to CUAHSIyoutube.  This year the main talks were by
Roger Pielke (Policy Relevant Science)
Tom Dunne  (The Evolution of Floodplain complexity)
Soroosh Sorooshian (Hydrological Forecasting over time and space scales)

Have a nice listening to.
Posted by About Hydrology at 11:59 AM No comments:

Mamhud, continues his excellent job here in presenting free data. Moreover he used his findings for driving the model SWAT in this other post. I use different models but the indications are anyway quite useful. 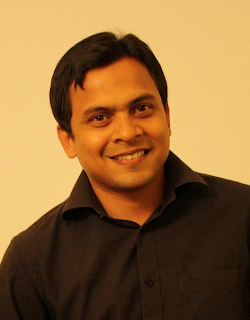 This intervetion is the second one. The first can be found here.
Posted by About Hydrology at 8:11 AM 1 comment: