Everybody talks about ecosystem services (ESs). But what are they ? As part of a conversation, I already talked about, I asked to Bilal Adem Esmail and Marika Ferrari to get an informed answer. Both of them pointed my attention to the Millennium Ecosystem Assessment (2005) of which a picture is presented below. In principle, any discipline can find its place in the diagram and try to understand with whom it can profitably dialogate. 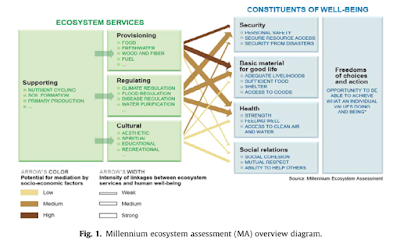 Bilal wrote of the subsequent “Cascade Model”, in which a distinction is made among structures, biophysical processes, functions and ecosystem services (as in the scheme below). This to make evident the anthropocentric nature of ESs, and their, in a sense, utilitarian nature. The cascade model, in fact, point to the benefits ESs produces and on their estimation (not excluding their economics). The  Model, besides, tries to make clear the role of Institutions and policies in the management of the feedbacks among the social  and ecological systems.

Bilal says: “Between saying and doing is half of the sea … or better there is to learn”,  learn how to concretise these holistic concepts in reality. As an example he reports what  Cowling et al. (2008) draw in their scheme below. 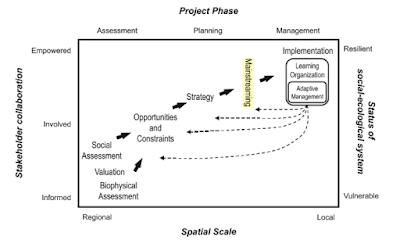 And here we go back to the issues discusses in the previous post. The scheme shows that the biophysical assessment is a fundamental starting point of the mainstream concept of ESs. per promuovere il mainstreaming del concetto dei SE (see the scheme below).

If we try to specify more to the basins or hydrology management, many studies call for a paradigm shift. Pahl-Woostls (2007,2008,2011) summarise the paradigms-shifts that you can see in the table below 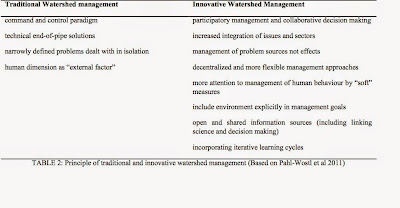 More in general, the community talks about  “Sustainability Transition” which, in turn, is the scope of the “Sustainability Science”. Citing Clark (2007) “Sustainability Science has emerged over the last two decades as a vibrant field of research and innovation. Today, the field has developed a core research agenda, an increasing flow of results, and a growing number of universities committed to teaching its methods and findings. Like ‘‘agricultural science’’ and ‘‘health science,’’ sustainability science is a field defined by the problems it addresses rather than by the disciplines it employs. In particular, the field seeks to facilitate what the National Research Council has called a ‘‘transition toward sustainability,’’ improving society’s capacity to use the earth in ways that simultaneously ‘‘meet the needs of a much larger but stabilizing human population, . . . sustain the life support systems of the planet, and . . . substantially reduce hunger and poverty’’ 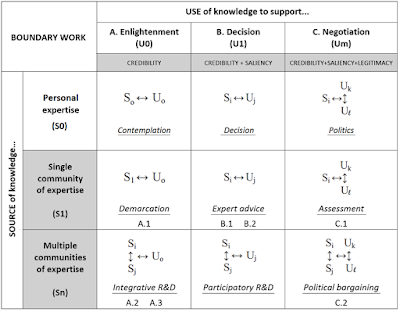 To conclude, and balance the novel you presented in the previous post, here it is a video, you will certainly enjoy.

Posted by About Hydrology at 10:27 AM No comments:

This post is to highlight the work of Fabio Ciervo, a Ph.D. student of Mariolina Papa that I co-advised with Vincente Medina. His thesis had the merit to put together two nice aspects of the recent research on soils. The first came from the work of Nunzio Romano [1] and co-workers, who show consistently that many soils present a bi-modal distribution in porosity, with effects in the form of the soil-water-retention curves (SWRC), and hydraulic conductivity, once Burdine or Mualem's [2] theory is applied. The other is the novel theory of hillslope stability coming out from the joint work of Lu, Likos, and Godt (e.g. [3]). 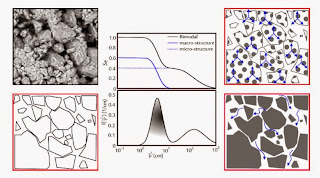 Who wants to enjoy his thesis can find it here: Fabio Ciervo, Modeling hydrologic response of structured soil, University of Salerno, 2015.
The code, developed in Java, that solves Richards 1D equation using these bimodal SWRC can instead be found on Github.
The Thesis produced a first paper which is under review in Vadose Zone Hydrology Journal.

Some References (others in the Dissertation)

Posted by About Hydrology at 5:54 PM No comments: 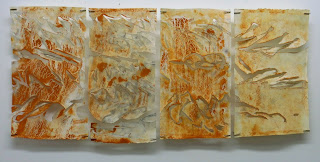 The even older ones:

Posted by About Hydrology at 1:58 PM No comments: 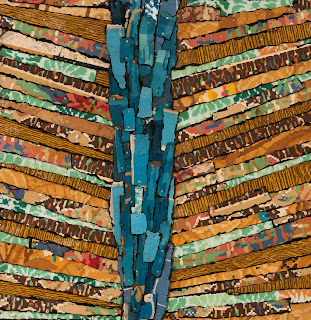 Use and Perception of Science's Results

I asked to Bilal Adem Esmail, one of our Ph.D. students, working on the relation existing between ecosystem services and the water cycle to comment my previous post on ecosystems and hydrology from his point of view. Here below, please find his answer related to the use of models. 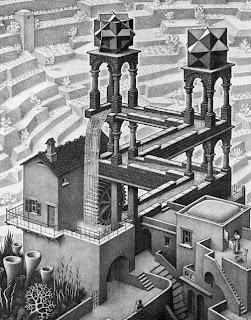 He says (my comments in italics):

“If I understood well your thesis, you support the idea that a good understanding and capacity of modelling biophysical phenomena are fundamental for making decisions, for instance about soil (my note: here used with the planners meaning), that are based on solid foundations. Specifically, it is needed to a correct quantification of the various phenomena, avoiding to use approaches too poorly approximate.
I agree with this thesis, which must be pursued with conviction by all, scientists and anyone. However, we do not have to go beyond a reasonable complexity, and fall in the Borges paradox to reproduce the Empire with a map the coincides identically with the Empire itself (see also here).
We can try to set these limits by considering two crucial elements: the use that will be done of the scientific knowledge (to disseminate, decide or, for instance, negotiate), and (not disjoint by the first), the perception of the same knowledge according to the users of the knowledge (see the scheme below). If perception is wrong nothing can be done.
Cash et al. (2013) and Clark et al (2011) suggest to consider the following three fundamental criteria referring to the perception of users of scientific knowledge: the perception of credibility (the scientific rigor perceived), relevance (of the specific problem), legitimacy (i.e. the capacity of inclusion of more points of view) of the sources.


We can take as an example of the Stanford's Natural Capital Project (NCP (http://www.naturalcapitalproject.org/) in the Water Fund in Latin America. These support governance mechanism and financial investments that guarantee clean water to downhill communities involving uphill communities. This works, more in general, by favouring collaboration among the stakeholder. NCP started to support scientifically the Water Funds, only after that first phase, by using a series of physical models of increasing complexity, called Tier1, Tier2, and Tier 3.

NCP approach is also transdisciplinary (Jahn et al., 2012, see also below^1) and includes at any stage of the process the stake holder. which is, actually considered the qualifying aspect of the process. In the experience of Water Funds, stakeholders were unable to understand the more complex biophysical models, and NCP had to implement simpler models called Tier0, ceasing the using of the complex models^2^3

This shows that in practice accepted scientific theories can find unespected difficulties, in relation to cognitive perceptions. "

^1 Transdisciplinarity is a critical and self-reflexive research approach that relates societal with scientific problems; it produces new knowledge by integrating different scientific and extra scientific insights; its aim is to contribute to both societal and scientific progress; integration is the cognitive operation of establishing a novel, hitherto non-existent connection between the distinct epistemic, social–organizational, and communicative entities that make up the given problem context. (Jahn et al 2012)

^2 - This use of the simplest models is also diffuse in science, even if not always justified. Because some aspects of science are very specialistic, even specialists are not able to understand the reasons of complexity which goes beyond their strict domain of expertise, even they tend to favour the use of the simplest model, even when they are too simple (see Einstein citation).  Everyone of us should remember that if what s/he does not understand an explanation of a phenomenon in a snap, not necessarily the explanation is to throw away, but possibly require more application to be understood. Obviously sometimes model complexity was produced just because the Occam’s razor was not applied: this is the case when complexity is not welcomed.

^3 - In my opinion, there is a basic cognitive limitation. To understand complexity (of even new paradigms) time and domestication is necessary. Aristotelians who looked inside Galileo’s telescope were not really able to see what Galileo saw. Their cognitive attitudes (their brains) were simply not prepared to, and they could not. Even scientists, supposed to be rational,  in face of unwanted results simply refuse to see them, and it is not uncommon the very famous colleagues died without accepting scientific statements against their own views, even if supported by overwhelming facts.
Posted by About Hydrology at 11:08 PM 1 comment: