More or less there was R before Hadley Wickham and after him. Before him it was a solid programming for doing statistical analysis. After him it was also cool.
Reasons are that probably he was able to intercept the best of functional programming^1 and introduce it in R. 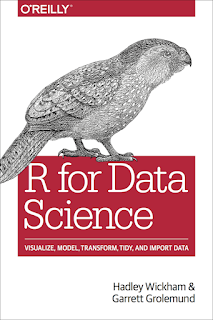 His new book R for Data Science promises to be a breakthrough. You can buy it or find its contents by clicking on the image.  From Revolutions:

" In the Tidy Tools Manifesto, he proposes four basic principles for any computer interface for handling data:


Those principles are realized in a new collection of his R packages: the tidyverse. Now, with a simple call to library(tidyverse) (after installing the package from CRAN), you can load a suite of tools to make managing data easier into your R session:
readr, for importing data from files
tibble, a modern iteration on data frames
tidyr, functions to rearrange data for analysis
dplyr, functions to filter, arrange, subset, modify and aggregate data frames

The tidyverse also loads purrr, for functional programming with data, and ggplot2, for data visualization using the grammar of graphics.
Installing the tidyverse package also installs for you (but doesn't automatically load) a raft of other packages to help you work with dates/time, strings, factors (with the new forcats package), and statistical models. It also provides various packages for connecting to remote data sources and data file formats.
Simply put, tidyverse puts a complete suite of modern data-handling tools into your R session, and provides an essential toolbox for any data scientist using R. (Also, it's a lot easier to simply add library(tidyverse) to the top of your script rather than the dozen or solibrary(...) calls previously required!) Hadley regularly updates these packages, and you can easily update them in your R installation using the provided tidyverse_update() function.

For more on tidyverse, check out Hadley's post on the RStudio blog, linked here."

^1 - For a course in functional programming, see here.
Posted by About Hydrology at 8:50 PM