This illustrate the long and detailed work of Wuletawu Abera during his Ph.D. His topic was modelling the whole hydrological cycle, meaning, all the components together with JGrass-NewAGE. 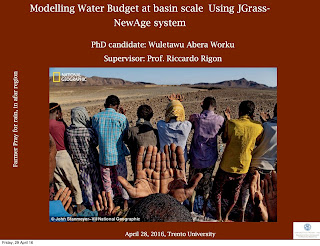 In order to do this, he had to line up several tools, partition the basins, interpolate meteorological data, to go crazy when the data were not available. Calibrate the submodels, each one by each one with available data; doing educated guesses, when any other option was inexistent. He introduces the use of satellite data in JGrass-NewAGE, and, I think, he did it well.  He never gave up when I bother him. And I think he did a god job. Click on the Figure above to access his presentation. His thesis is available upon request to the Author wuletawu979  <AT > gmail.com.
Wuletawu maintains his own blog where you can find his thoughts and achievements.
Posted by About Hydrology at 7:07 PM No comments:

This is to announce a Summer School open up to 25 participants, on modelling catchment hydrology (including recent travel time theories) with products created on the basis of the Object Modelling System v3 (OMS3)  infrastructure.  The School will be held at Trento  university (Italy) from July 18 to July 21 (four days). It is addressed to Ph.D. students, post-docs, young researchers, particularly motivated master students, professionals, who wants to explore a viable, more modern, more flexible and easily expandable alternatives to SWAT and HEC-HMS. 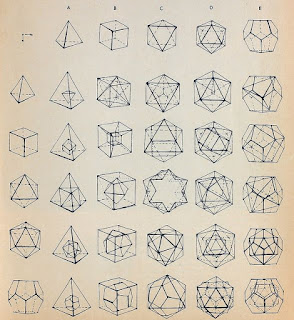 The system is highly innovative for hydrology, since various modeling solutions can be built upon the basic components to fulfill what  research or practice of water management and hazards require.
In particular during the School, two modelling systems will be used, AGEs by ARS-USDA, and JGrass-newAGE by University of Trento which partially share components and tools for calibrations and other tasks.
More information and details can be seen at the School website: http://webmagazine.unitn.it/evento/dicam/9539/oms-2016
More information on JGrass-NewAGE can be found at: http://abouthydrology.blogspot.it/2015/03/jgrass-newage-essentials.html


More information on AGEs can be found instead at: http://abouthydrology.blogspot.it/2013/01/object-modelling-system-resources.html
Posted by About Hydrology at 3:44 AM 1 comment:

Blal Adem Esmail Ph.D. defense on this topic represents, I hope the starting point of a more in deep relation between hydrological modelling and water management.  His efforts were in defining an overall framework to analyse the problems, which represents a new starting point and, in my opinion, a good reference for who wants to work on  ecosystem services and water. 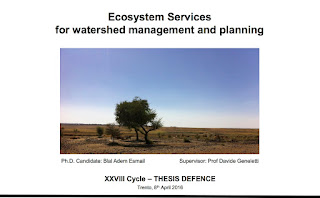 I believe many indication either for policies and for science can be derived from his work. Presentation can be found here or clicking on the picture above.  His thesis can be found, instead here.
Posted by About Hydrology at 10:43 AM No comments:

GEOframe has a logo and a lot of documentation

Geoframe, the set of modelling components that made JGrass-NewAGE has a brand-new logo by Marialaura Bancheri.

Presenting it is also an excuse to announce that there are a lot of new components documented.
You can find them at the GEOFRAME blog.

Posted by About Hydrology at 5:40 PM No comments:

The Virtual Hydrologists Project and other initiatives about Hydrology History

This is to bring to your attention to a very welcomed initiative of the American Geophysical Union. In thee words of Efi-Foufula Georgiou (GS):
"We are happy to announce the launch of a new initiative within our Hydrology section—the Virtual Hydrologists Project (VHP). The scope of VHP is to preserve the legacy of eminent hydrologists who have shaped the field of hydrologic sciences and education by making their scientific work easily accessible to the community. VHP is a living project, which will continually invite the community to contribute material, additions, and/or corrections toward building a comprehensive library to be enjoyed by all generations of hydrologists—from junior to senior researchers". 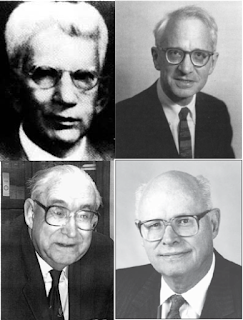 Some years ago AGU produced also a series of interviews which are now on YouTube:
In the same line, Keith Beven (GS, RG) started a parallel initiative  the "History of Hydrology Wiki" which can be worth to visit.

Learn from the masters !
Posted by About Hydrology at 1:11 PM 1 comment:

These are the script I use as templates for my short (very short) classes (Hydrology and Hydraulic Constructions/Urban Hydrology) when I introduce R. Reading a good R textbook or manual would be important, indeed to understand what I am doing. These scripts have to be "studied", meaning that operations are commented but for really understand them, any command should be studied.  Since data comes in various formats, it is shown how to deal with them.

Knowledge of what R Studio is is given for granted.

- A quick introduction to R (Knitr pdf)
This assume almost no priori knowledge of R. However you have to know how to load and execute    a script  in Rstudio. I suggest that, once loaded the script, you execute one command at time. You will know what vector and data frame are, and how to access their data.

- Simple plot in R (Knitr pdf)
It generates some random data (normally and uniformly) distributed. Plots them as a time series, as an histogram as a empirical cumulative distribution function. 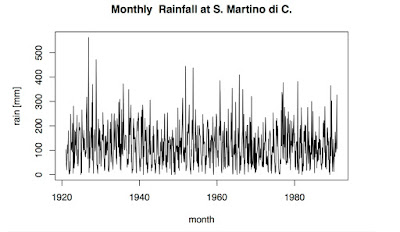 - Reading rainfall data and plotting them (Knitr pdf, the dataset, the Readme of the data)
It reads data in cvs format, which come in many columns, each for one year; does some data treatment, melts the columns to produce a time series object, plots them, does the statistics of non-raining days and raining days. Estimates the autocorrelation function.

-  Reading the data of discharges of River Adige (Knitr pdf, the dataset, Readme file)
It reads the data from a very rudimental file. Transforms the data in a reasonable time series, and plots it.  It introduces also the use of boxplots.

-  Estimating  depth duration frequency (ddf) curves of Duckburg with R  the dataset, Readme file)
Starting from the annual maxima of given duration (as given in Italy) it interpolates the data with a Gumbel pdf using a couple of standard techniques. Uses Pearson ranking for getting the best estimator. After obtaining the probabilities for the various durations, it uses linear interpolation for getting the parameters of the idf curves. I admit, it is not a great statistics exercise. Let say, it is the standard we use in Italy. All is done step by step. The smart reader can shorten the procedures a lot. In principle is not difficult to automate the whole procedure, producing from the initial data table the final product.

As many knows, I teach Hydraulic Constructions, which means, in my case aqueducts and sewage systems. Recently, I tried to renovate my view on the latter topic by looking at recent directions and works on urban hydrology. In this phase of renovation, I found very useful the CUAHSI cyberseminars on Urban Streams which are available on youtube (also addressed by Dr. Anne Jefferson here).

Here below, please find the seminars.

Green infrastructure, groundwater and the sustainable city
Larry Band (GS, RG), Institute for the Environment at University of North Carolina

Posted by About Hydrology at 9:03 AM No comments: