I am summarising here what I saw that rised my interest in the Italian biennial meeting of Hydraulics, Hydrology and Hydraulic constructions. Obviously I followed just the hydrology section and missed the rest. Therefore I could have not seen some very fundamental in one of the other subdisciplines. Do not blame me !
As a general observation, I have to say that few are still really producing models. Many are using products from others notably: tRibs, WRF-Hydro, SWAT, among the foreign. Cathy, Topkapi-X and GEOtop among genuine Italian products were presented at the Conference. Many young people also work on remote and proximate sensing research, where they exploit the capabilities of the new tools (especially UAVs but also on traditional remote sensing). Some work on statistical and probability models.  Some on eco-hydrology. Many we know they work on groundwater, but almost no abstract was presented on the topic that dominated last century literature. Remote sensing is certainly a great topic but today I will not talk about.
In doing my choices I keep an eye on the three step conceptualisation of learning processes represented in figure. There is stuff that is completely mainstream and has the maximum of attention in these years, other on which interest is growing, and other that foresees the future of the discipline.

The Italian hydrological community, especially if we include the numerous those who live abroad, is pretty alive (at present the WRR, HESS, ADWR, PNAS have Italian Editors). However, did I see material changing the paradigms ? Let's see in my comments below.

So, my favourite (if you click on figures, you are redirected to the slides):

Marco Marani (GS) and coworkers rethink the estreme value concepts, observinfg that Pearson's distributions are obtained as a limit of an infinite number of events. He proposed intermediate distributions, when the number of observations is limited. He, they, called these distributions "metastistical". This is, I think, good and pretty much necessary too. Authors assume that extremes are sampled from iid variables, while others, Jim Smith for instance, think that extreme events are sampled out from a separate population. Is there any method to infer it from data ? 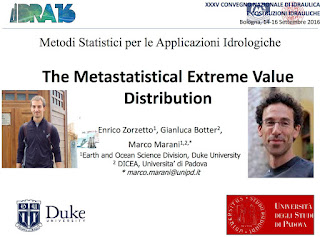 Elena Volpi and coworkers discussed the idea of return period. Her statement is that statistical independence is not a requirement for obtaining the classical equation of return period (post coming soon).
This is inscribed in the old story of stochastic processes used as representation of phenomena that appear highly variable. The field needs some refreshment after the discovery of climate change. Volpi's et al. Has the merit to bring in some novelty. I was intrigued by the separation and relation between return period and waiting time. 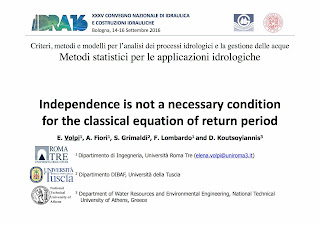 In the same subfield I registered attention to copulas, as a means to move from a univariate dominated applications to multivariate.

Strangely not application in machine learning or pattern recognition which could be os some interest when coupled with complex time and spatially varying signals.

Gabriele Manoli (GS) uses a simplified ABL theory to study the effects of vegetation on precipitations, and, in particular he sorted out the effects of vegetation ages. Some about the theory of ABL came from an evolution of thet good old model by John Albertson (GS) but the novelty here is that eco-hydrology enters in the merit of phenology-plants evolution. Conditions in which conclusions are drawn are pretty uniform (probably Durham forest can be considered a nice approximation of it). the problem of heterogeneity calls for a treatment made with a process-based model. 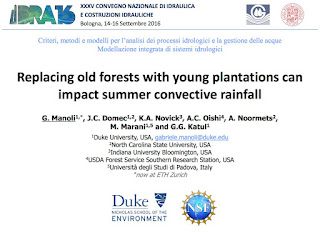 Nadia Ursino and Chiara Callegaro explore the formation of some vegetational patterns made possible by water availability in water-limited environments. 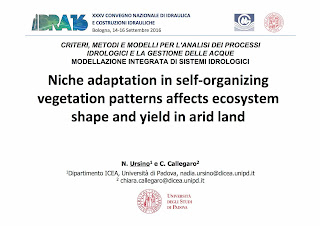 Tuscia’s guys (Salvatore Grimaldi et al., GS) make a lot f interesting things, but here, I have chose their 100 square meters pluviometer. Details on on it, the paper, slides and poster are below. 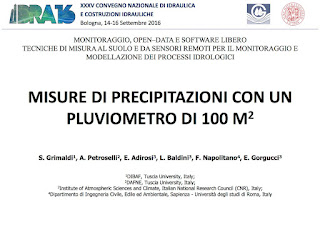 We’ve got some good work by Giacomo Bertoldi (GS), but he is too close to me for me being neutral. I mention two works. One by Alfonso Senatore (GS) and coworkers. He uses WRF coupled with WRF-Hydro. I am not sure of the contents of the latter. The good and the new could be that there is one model that treats with very detail the interactions with the atmosphere (thanks to WRF) or should. If it is a real thing, I am envy, because it is one thing I believe we have to add to GEOtop. 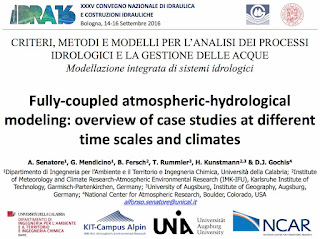 Monica Piras showed various comparison between process based models. She and co-workers used the model “blindly” without giving direct judgement about the performances of each one. Anyway, it is apparent that models behave differently, and someone should be wrong. Interesting part of her presentaion was the mention to downscaling techniques, necessary to couple climate projections and hydrological models. Below, please find her presentation. 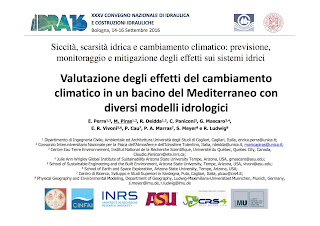 I did not mention travel time theories. We already talk about it extensively. Nothing especially new was presented that it is not already in my previous posts, just some incremental advancement.
Posted by About Hydrology at 6:57 PM