Just verbatim form the Azimuth blog (here). I place it also here for not forgetting it. Maybe later I will also comment it.

"Here’s a video of the talk I gave at the Stanford Complexity Group:


You can see slides here:

Abstract. If biology is the study of self-replicating entities, and we want to understand the role of information, it makes sense to see how information theory is connected to the ‘replicator equation’ — a simple model of population dynamics for self-replicating entities. The relevant concept of information turns out to be the information of one probability distribution relative to another, also known as the Kullback–Liebler divergence. Using this we can get a new outlook on free energy, see evolution as a learning process, and give a clearer, more general formulation of Fisher’s fundamental theorem of natural selection.

I’d given a version of this talk earlier this year at a workshop on Quantifying biological complexity, but I’m glad this second try got videotaped and not the first, because I was a lot happier about my talk this time. And as you’ll see at the end, there were a lot of interesting questions. "
Posted by About Hydrology at 4:03 PM No comments:

A new topic for a Ph.D. in Hydrology at University of Trento. Modelling water flows under phase transitions

This study starts from a pore scale view of flow in soil and aggregate it at the representative elementary volume, (REV), scale according to statistical assumptions, to obtain new forms of the Richards equation. Flows are assumed to happen under normal and/or freezing conditions and under evapotranspiration demand. Transitions from unsaturated to saturated conditions will be properly accounted in all types of flow. The theoretical work at the basis of this proposal is contained in Dall’Amico et al. 2011 and Tubini, 2017. At the beginning the system will be modeled by coupling the water budget equation and the energy budget equation, neglecting vapor mass budget, as usually done. The candidate should take care of integrating the equations with appropriate and sound numerical methods that guarantee mass and energy conservation, following the footsteps of the work by Casulli and Zanolli (2010) and work for possible extensions. 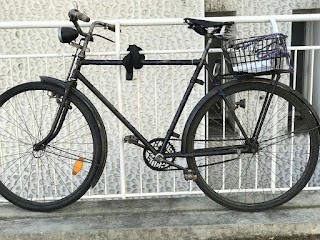 There are various possible further development of this research. One is to couple the water and energy budget with surface waters simultaneously solved, another is to deal with water vapor explicitly. Others developments could come ongoing.

The informatics behind the code will follow (and, in case co-develops) the developments pursued by dott. Serafin, Ph.D. work inside the Object Modelling System, version 3 or subsequent (OMS3, David et al., 2013), that will take care implicitly of execution of parallel processes and will provide various services to computation (e.g. Serafin, 2016).

All the code developed will be done in Github (or similar platform), inside the GEOframe community and will be Open Source according to the GPL v3 license.
The candidate will take care of implementing, besides the code, the appropriate procedures for continuous integration of the evolving source code, and s/he will be also asked to maintain a regular rate of commits to the common open platform. Despite these conditions, and being free and open source, the code will be intellectual property by the coder. This will be guaranteed also by the components-based infrastructure offered by OMS3, which allows to better define the contributions of anyone. (See also: For incoming students, The tales of open source codes).


The implementation part will be followed, accompanied by testing activities, either for mathematical consistency, than for physical consistency with experiments and field measurements. These will be made especially by Dr. Stephan Gruber (GS) group at Carleton University, where the candidate will be asked to spend some periods od his/her doctorate. Participation to experimental activities will not be intended to be purely passive, the candidate will be asked to actively participate as much as feasible and reasonable to any part of the research.

The Ph.D. student is intended to produce, besides working and tested codes, also at least three papers in major journals (VQR Class A), of which, at least one as first Author.  Duration of the doctoral studies could be three or four years.

This talk (and work) is another rearrangement of Niccolò Tubini work, and continues Matteo Dall'Amico Ph.D work. It derives the set of equations for water flow in freezing soils based on the same assumptions by Matteo but the results is slightly different at the end. 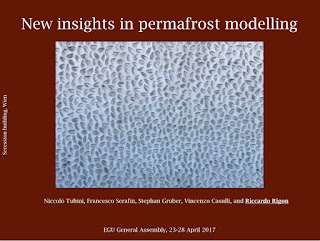 Click on the figure above to see the presentation. Hope you enjoy it.
Posted by About Hydrology at 5:52 PM No comments:

This is the video of Dani Or (GS) lecture for the prize he received at this year EGU Wien. Dani is an outstanding scientist and any of the things he does deserve attention and a reading. He talked about evaporation and others of his lectures were already linked in this blog.

Here below the video of the presentation of Dani.


Here his lecture (unfortunately a little out of focus, but still visible. I hope that there will be an official, professional record from EGU). You can find the PDF of the slides here.

Posted by About Hydrology at 7:00 AM No comments:

This is the material of the SC34/NH10.2 ECS: Open-source software for simulating hillslope hydrology and stability
by Giuseppe Formetta, Francesco Serafin, Riccardo Rigon, Raffaele Albano and Luigi Lombardo (co-conveners) 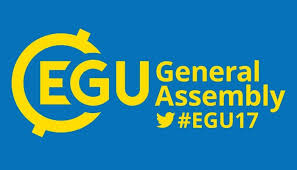 For all of this work it is necessary to download a number of softwares.

Posted by AboutHydrology at 1:51 PM No comments: