Difference between a blog post and a scientific paper

I get it from my student Aaron Iemma. I think it summarises many things, and it is worth reading it. 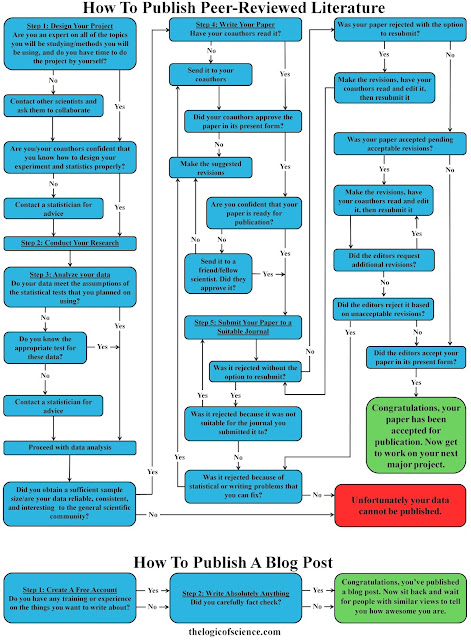 Actually when I read it for the first time, I was not paying attention to the title of the diagram but at the type of scientist it is depicting. I am not of that type, I and I would modify the first three points of the diagram. In fact  it conveys a restricted way to do science (and, in a sense, it is not completely correct). It seems here that science is about collecting data, making some statistics on them, writing a paper. The Hypothetical-Deductive paradigm is completely forgotten, as well as the idea of models, the Galilean idea that all is written in the mathematical language (but I would be less demanding, by asking at least to have a model formalised in some unambiguous statement in normal language).  So the graphics above is the example of how data science works, and it is certainly true, when it emphasises the many iteration and the sieve any parcel of scientific knowledge has to pass trough. I however, do not collect data. I do mathematical models of reality, and use data to  validate or disprove them. My models require data but viceversa, data collection requires to have a model in mind, having defined quantities to be measured, and having implemented instruments to measure what desired. That is intrinsically slow and strenuous but, at the end, it is the most effective way to proceed. Blog procedure is easy but with not rewards and with no effective results. This is a blog however 😉 but this blog, from another point of view, provocatively asserts that there are at least ten reasons why a blog post is better than a paper.
=
Posted by About Hydrology at 4:58 PM