This paper shows the estimation of whole water budget in a 100 hundred square kilometers catchment of the Prealps, the Posina catchment.  The challenge here is to close the water budget with a coarse-grained model. The basin has alla the complexeties such a basin can have, and snow has to be taken into accounts.
Input data available are discharges measured in several gauges and hydrometeorological data measured in twelve meteo stations. However, evapotranspiration is not explicitly measured, neither are the water table levels. 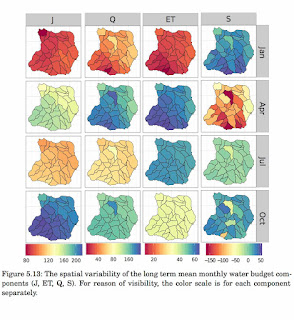 The paper starts with treatign carefully the water inputs, and, chosing Kriging as a method for interpolation, detailed how to do it with the new tools offered by Jgrass-NewAGE (all the posts here).  It also discusses the separation of precipitation in snow and rainfall, and illustrates a way to do it by using MODIS data. Closing the water budget further requires some trick for separating water storage in soils and evapotranspiration. The paper devises a method for doing it, in assuming that the water storage is nullified after an appropriate set of years, called Budyko's time. The final outcomes is a reasonable estimate of any of teh components of the hydrological cycle at various time scale, and spatially distributed according to a partition of the catchments in hydrologic response units (HRU), as those depicted in the figure above. In any case, you can have the details of the story by reading the paper itself, by clicking on the figure or here.
Information related to this paper can also be found in the post dedicated to Abera's Ph.D. defense.
The preprint has been submitted to Advances in Water Resources.

The paper was revised. Answer to reviewers, complimentary material and the new paper itself, can be found on Zenodo.

Update 2 - The paper was accepted for publication in Advances in Water Resources. You can find it here.
Posted by About Hydrology at 4:28 PM