The current idea in many modern modelling systems (at catchment scale) is that the hydrology of control volumes can be reduced to a set of interconnected reservoirs (Fenicia et al., 2008; Tague et al., 2010; Clark et al., 2008; Hrachowitz et al., 2013). Each one of these reservoir can be thought as “well mixed”, meaning that each water reservoir acts like a chemical reactor where all what comes in is uniformly distributed across the reservoir and perfectly mixes (and instantaneously too) with everything already present. Some of these reservoirs have a geographical identification (as happened in the geomorphologic unit hydrograph, eg. Rinaldo and Rodriguez-Iturbe, 1996), some others have a functional reason and we could call them “embedded”, or with no-geographical reference. They are used especially to disentangle processes, to attribute the right travel time to water, and, more prosaically, to get right quantitative adjustements to the various outputs, discharge, first of all. 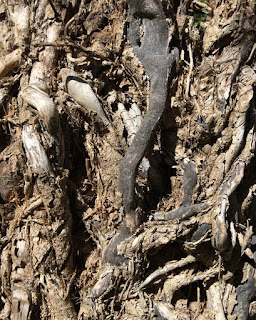 This way of working is quite necessary (but remind Todini’s adage: first they had a linear reservoir -Sherman, 1932 -, then they introduced a sequence of linear reservoirs - Nash, 1957, after, they made the reservoirs non linear, Dooge, 1959; finally was a mess, Sagawara, 1967) but the separation (or the composition, it depends from the point of view) of the domain in parts is somewhat that remains to be demonstrated.

In using these simplifications  nobody of the researchers mentioned goes through a direct simplification of coupled (hydrological) equations at the finer scale and coarse grain them^1, but directly adopts the paradigm of reservoirs and validate it, nowadays technologically, by using a set of GOFs (goodness of fit) indicators.

This system is, IMO, intrinsically weak but I, like the others, adopted it. A statistical theory is missing, and I believe that it will arise from the travel time theories.

In the revamp of  these reservoirs' theories, the attention to the spatial distribution of the reservoirs should find again its place. Distinguishing, “vertically”, reservoirs as canopy, surface, vadose zone and groundwater storage is a necessity that is widely recognised and should be deployed. Reservoirs “lateral” aggregation (by using convolutions or following new paradigms) is the follow up (see also Rigon et al., 2016a). Embedded chains of reservoirs should be also necessary, as invoked by those who study small catchments experimentally (e.g. Birkel, 2011). All should be investigated carefully, and complexity added after implementing “ad hoc” experiments, or using appropriate datasets.

This scenery would not be complete if these models would limit themselves to consider just the forecasting of discharges. They should also convey a reasonable set of processes to close the water budget. Next would be to include appropriate simplifications of the energy budget, a necessary companion. The latter, however, was never tried so far in coarse grained models.

^1 Perhaps Paolo Reggiani et al, 1998 tried it in a generic way, making experience on Gray’s previous work, and Todini did it, his own way with Topkapy, i.e. Liu and Todini, 2002; see also Todini, 2007 and my talk here. Paolo's work is certainly to be reconsidered.

Dooge J,  (1959) - This reference was suggested by Ezio Todini, but I did not find it (the one talking of non-linear reservoirs).

Sugawara, 1967, The flood forecasting by a seried storage type model, IAHS Publication no. 85, 1-6