We presented Project PRECISE to the last EUREGIO call. We know that competition is high but the project objctive are really important: of practical and theoretical use. Besides, they are based on existing experimental infrastructures and models, which would have the occasion to be maintained and evolved.  Collaborations inside the project would be of very high quality.

The overall goal of the project PRECISE is to advance ecohydrological modeling in mountain grassland ecosystems (with an eye to towards generalisation for other types of vegetation), in order to have quantitative instruments that supports management and impact assessment studies. In particular, we want to improve our understanding and modeling capability of the effects of climate, soil, topography and plant functional types on the water balance (with a particular focus on evapotranspiration - ET) and vegetation productivity in alpine grassland ecosystems in a range of scales from plot to hillslope.

We address the following research questions:
R1. How does plant functional diversity and plant water-use strategy influence the watervarying abiotic conditions (i.e. soil physics, topography, climate)?
R2. Which is the relative role of biotic (plant functional diversity) versus abiotic (soils, topography, climate) processes in determining the spatial and-temporal variability of ET from the plot to the hillslope scale?
R3. Which is the right level of complexity necessary in models to produce R3 at any scale of interest?
R4. How to take advantage of a combination of advanced multi-sensor, multi scale observations to better constrain and improve spatial accuracy in coupled, process based ecohydrological models? 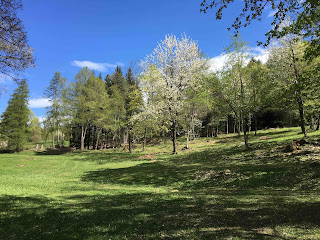 In recent years, plant-physiology studies provided an increasingly detailed knowledge of the small details of plants behavior, but only some of which started to be inserted in ecohydrological models (Fatichi et al., 2015b). These include stomata actions and photosynthesis. Two main categories of models can be roughly individuated to this respect: those who approach the problem very mechanistically (Fatichi et al., 2012a), by adding detailed processes parameterizations, and those who make reference to optimality principles (Prentice et al., 2015), claiming that feedback mechanisms were discovered during plants evolution to maintain good performances under sub-optimal conditions (Prentice et al., 2015).
Most advanced plot-to-catchment scale models include a three-dimensional treatment of the water fluxes in soil, explicit spatial variability of atmospheric forcing and turbulence, and a well-balanced complexity in the formulation of the water and energy budgets. These aspects cannot be simply reduced to factors external to the vegetation dynamics, when focusing on the hydrological cycle, and not on a single plant. Among these models are GEOtop-dv (Della Chiesa et al., 2014; Endrizzi et al., 2014) and Tethys-Chloris (Fatichi et al., 2012a, 2012b).
To further develop this models, a new infrastructure is deemed necessary in order to enable comparisons of the alternative models that are emerging very fast from research. In fact, the monolithic informatics of traditional design (Rizzoli et al., 2004) hinder any change of the code and slow-down progresses of research. Fortunately, recently “component-oriented” modeling approaches (e.g. David et al., 2013; Formetta et al., 2014) were deployed. Such approaches make it easier to change modules simulating specific processes, while maintaining unchanged the others. Three modeling challenges are faced by modelers. The first is to model water and carbon processes of a single plant in its entirety from roots to leafs, upscaling cellular micro-physiology at a reasonable coarse-grained level. The second challenge is to differentiate vegetation types in a sound way. Today this is addressed by abstracting plants in functional types (PFT, e.g. Bonan, 2002), which definition is widely criticized. More recently, however, research has focused on the definition of plant traits which correspond more closely to models’ parameters (Fyllas et al., 2014). The third challenge is to link plant physiology with the biosphere as a whole, considering the interactions with pedo- and atmosphere (including spatial and temporal patterns). This task, has, in turn, many aspects. It involves: (1) an appropriate modeling of the environmental conditions, especially turbulence (Bertoldi et al., 2007; Siqueira et al., 2009);(2) the mathematical description of soil water interaction with roots and the reciprocal influence of plants for accessing energy and nutrient resources (Manoli et al., 2014); (3) a more accurate separation of soil evaporation from transpiration (Jung et al., 2010; Lawrence et al., 2007); (4) and of plant transpiration from groundwater and streamflow (Evaristo et al., 2015); (5) and, finally, the need to upscale the mathematics of plants behavior at the hillslope scale, with the appropriate degree of complexity. This last point is a key issue, especially in mountain terrain, given the nonlinear dynamics inherent to hydrological and vegetation processes. Although, the process’ importance and heterogeneity clearly changes with the spatial scale, the conceptualization remains the same, and - so far - similar approaches have been used on very different scales (Pappas et al., 2015). On the other hand, the pool of observational data vastly expanded in the past couple decades, bearing opportunities for modellers to pursue quantitative explanations of what is observed, and predict the spatial variation of parameters. The challenge is now to make use of the extensive data pool to test hypotheses generated from optimality principles, select the one that gives the right answer, and finally meet the requirement of models reliability (Prentice et al., 2015).

In-depth understanding of plant-water interactions drives accurate quantification of the water budget, where biophysical parameters (e.g. biomass) play a key role. However, to correctly assess canopy stomatal conductance and biophysical parameters controlling the water balance equation, plant functional diversity (i.e. biomass abundance of grasses, herbs, legumes, dwarf shrubs) have to be considered. Regarding ET, which is the key part in the water budget driven by vegetation, plant water-use strategies of existing species within individual plant functional types significantly bias biomass-ET correlations (Della Chiesa et al., 2014; Leitinger et al., 2015). Mitchell et al., (2008) already defined ‘hydraulic functional types (HFT)’, which revealed promising results to characterize plant communities regarding their ecohydrological characteristics. However, although (1) methods to assess plant trait diversity in the field (Lavorel et al., 2008) and (2) a trait database with steadily increasing numbers of plant traits (Kattge et al., 2011) exist, this aspect is virtually inexistent in ecohydrological models. Moreover, once the implementation of plant functional diversity is satisfactorily achieved, the dynamics of ET under field conditions (i.e. soil moisture, and microclimate) have to be introduced to finally assess needed crop ET. When measuring ET, two types can be distinguished: (1) water budget- and (2) water vapour transfer measurements. Water budget methods measure incoming and outgoing fluxes of water, while water vapour transfer methods assess the flow of water vapour. Most known among the latter is Eddy Covariance, operating at field scale and not usable to fully address the water budget. Among the water budget methods, lysimeter measurements are of growing interest, as they operate at plot scale and with individual samples (also referred to as ‘sample’ scale). High precision lysimeters evaluate all the water budget components and are state-of-the-art to entangle biotic responses (Schrader et al., 2013). Accompanying phytosociological-, soil physical-, and soil hydrological data are needed to fully explore the relationship between biomass and crop ET. Moreover, lysimeters are suitable to separate evaporation from transpiration for varying micrometeorological conditions and soil characteristics ,providing valuable parameters for eco hydrological modeling. The overall aim of in-situ water budget analyses in PRECISE is to provide guidelines for ecohydrological model selection, considering sensitivity of model output to input parameters in order to subsequently detect structural deficits of the model itself (i.e. to reduce model complexity where possible and increase precision of system representation).

1.2.3 Use of proximal sensing of vegetation for ecohydrological modeling

Plant-water interactions can be addressed form the cellular up the global scale, and are studied by different scientific communities. There is an inconsistency – both in term of approaches and scales of interests - between the lysimeter community, focused on confined vegetation patches, the Eddy Covariance (EC) community (represented by the FLUXNET-ICOS networks), measuring carbon and water fluxes at the ecosystem level, the hydrological community working at watershed scale, and the remote sensing (RS) community working at regional scale (Fatichi et al., 2015b). If data from these communities can be interconnected, a step-change in the scientific understanding of ecohydrological cycling will be achievable. However, scale gaps first need to be bridged.
UAV platforms are a key instrument for solving many of the scale issues in measuring and modeling processes involving vegetation interactions with the earth and the atmosphere. First, UAV-borne observations can support ground measurements, allowing not only to upscale local observations to entire ecosystems, but also to interpret limited observations in a wider context. Second, they can be integrated with hydrological models both by providing high-resolution distributed input data, and for evaluating model performances. Third, they are a unique source of validation data for remote sensing observations.
UAV applications in geoscience, rely on the collection of multi-, hyper-spectral in the visible and near infrared portion of the spectrum and thermal imagery. The first allows retrieving information of vegetation structure, calculating vegetation indexes, like NDVI, and inverting radiative transfer models for retrieving spatially explicit information about biophysical parameters (Calderón et al., 2013; Duan et al., 2014; Zarco-Tejada et al., 2012). The second is useful for measuring land surface temperature (LST) at a very fine resolution, up to the single leaves (Gonzalez-Dugo et al., 2013).
The combination of an energy balance model with UAV thermal infrared data with a resolution of few centimetres offers a new perspective for ET and SM mapping. Involved processes can be addressed at a proper spatial scale. One promising approach is the two-source energy balance model (TSEB) (Kustas and Norman, 1999), and it extensions ALEXI/DisALEXI (Anderson et al., 2008), which computes the surface energy budget for the soil and canopy components directly from LST and LAI observations. From the point of view of the spatial and temporal resolution, the availability of UAVs allows a big improvement with respect to satellites (Hoffmann et al., 2015). In this project, we want to exploit hi-resolution maps of vegetation properties, LST and surface energy fluxes for a spatially distributed validation of process-based, distributed ecohydrological models. The current research challenge is to directly implement in process-based models the possibility to use observations coming from remote and proximal sensing. In this sense, high resolution data integrated with the modular modeling system we will implement in this project will offer unforeseen chances for testing new hypotheses with different model formulations.

Pflimlin, A., Faverdin, P., Béranger, C., 2009. Half a century of changes in cattle farming: results and prospects. Fourrages.


Posted by About Hydrology at 6:40 PM