My Past Research on Hydro-geomorphology


The work on evolution of river networks, certainly enters also in this category. Here however, it is reported about those papers that deals directly with quantitative geomorphological analysis.
In most of the papers, the relationships between the various parts of a river basin are analyzed with fractal geometry techniques.  Such knowledge is useful not only for the evaluation of river basin evolution models, but also in  identifying the nature of their hydrological response to given events and their paleoclimate.  In [J2], using the Peano Basin, a mathematical reference structure, it is suggested that the amplitude function of natural networks can be reproduced with a multifractal multiplicative
process.   In [J11] this concept was rigorously formalized in the framework of random multifractal cascades theory. 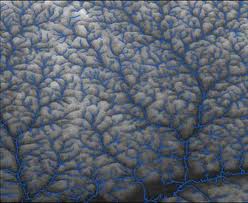 The fractal properties, that is  power laws relating to  contributing areas and the length of stream reaches, were rigorously analyzed in [J15]. In [J17] more relationships between these characteristic quantities were found and an explanation of the nature of Hack's law is suggested.
In [J27] the structure of the river networks is further investigated by analysing the tributaries statistics. The relationships were verified experimentally by means of Digital Elevation Models (DEM).

Given programs for the extraction of digital terrain models (DEM) and their treatment, the natural development was the implementation of an open-source geographic information system: JGrass [s2].  JGrass, now part of uDig, contains within the package a large amount of GIS methods, jointly known as the Horton Machine [eb-3] to support the most common and some less common tools of analysis for river networks topology,  channel extraction, hillslope delineation. A review of these tools is in [a57].

Papers and work on landslide triggering are also concerned with geomorphology but referred in a different post.

[s2] Jgrass (since 2002): it is a full featured GIS system built to support the hydro- geomorphological research of the group since the early 2000s. Recently it has been integrated in uDig. Current developments (which go far beyond my contribution) are available at: http://udig.refractions.net/