This paper extends the concept already introduced in  two previous papers on Hydrological Processes  and Earth Surface Processes and landforms. The idea pursued in the first was that hillslope processes can be conceptualized in order to obtain a topographic index useful for a simple hydrological modelisation of hillslopes. The second paper investigates the role of soil depth and push further the conceptualization, besides introducing some concept of self-organization in the production of instabilities. 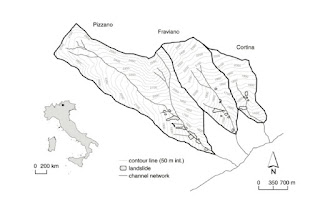 This third paper in row applies the theory above to a case in North of Italy, and tries finally to fill the gap between hillslope modeling and catchment analysis. The paper also introduces the concept of catchment connectivity, which is usually given for granted but it is, indeed, not always present, and build on previou work by Jeff McDonnell and collaborators and Stuart Lane.  Finally the paper investigates the hillslope stability of the basins above.

The model described, CISLAM is available as an OMS component here.

Posted by About Hydrology at 4:06 PM