On a flooding vignette that is often posted on the web

This picture whose I do not know the authorship is going around the web to support the idea (Which I also support) that streams should be left as unconstrained as possible to avoid flooding. But is this image really hydrologically sound? 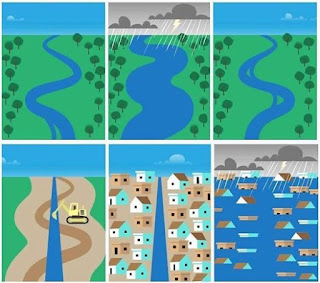 Let say that the top row is highly simplified and objects size counts. GOing to critics, in the first top figure, it is unconceivable that vegetation stays at tens or hundreds of meters from the stream. Usually vegetation goes very close to the stream, at least the vegetation that can have its roots inside the water table. This also means that, in figure 2 top row, when the flood comes, it will inundate part of the forest. Finally figure 3 top row should have more evident traces of the flood, for instances some sediment here and there. Correctly, streams are  not channels, as first figure on bottom row wants to convey and the man makes what it should not be done. The human in the picture, however, is not represented at a size compatible with the trees dimensions on top row. Or, from passing for figure on top to the bottom ones, there is a zooming in or the digger is something like 40 m high. The same for the houses in figure 2 bottom row: they are certainly not proportionate with respect to the trees dimensions. Let’s say that the picture is not so fair to this respect.
Certainly the rectification of the river is a bad thing and the houses are built too close to the river. Streams are source of ecosystem services and boost the economy so it was taken the risk  to build close, or even over the river, many times, in a trade-off that was justified decades ago but not anymore now.  We bear the weight of History here. Besides, as many knows, human activities alter infiltration in soils and rainfall, consequently, is more efficiently transformed in runoff. However, unless we claim the intervention of climate change, the flood in the last figure is grossly exaggerated. If we think the houses are no more than 15 m (not 40 m as proportionality could suggest the proportionality between the top and the bottom row), the last picture show a ten or more meters of water. By far, this cannot be generated (all over and upstream the city) by the changes happened in urban soil use. The flood, in fact, is reasonably caused by a  massive generation of runoff in the upstream basin, not by the local urban runoff. To sum up, the message is shareable, Please give room to river to expand. Do not build too close to river (this increases exposition and vulnerability). However the reason for the flood in the last picture, i.e. the hazard is not the city which just suffers the flood. The inappropriate urban planning , however, increases the risk and the losses.

There are obviously cases in which the floods are caused by the city impermeability: this is when the catchment is smaller or of a size comparable to city itself. In this case soil modification cause the runoff which in turn causes the flood. The city of Genova, in Italy, is one of these cases: but there are many other in our contemporary world, where we have many huge megacities (but this is not the case of this figure. .

Concluding, the message is right but the hydrology is wrongly represented.  Yes, I know: I has been too picky.


P.S. - water in flood ps is rarely blue though. Usually, it is full of sediment and of the color of the soil it transports.
Posted by About Hydrology at 7:49 AM