What do I have to do with polyacrylate ?

It happens that a researcher deviates a little from his mainstream research. This is one of the cases. Dott. Pier Giuseppe Marcon came to us suggesting that polyacrylate could have peculiar thermodynamics characteristics and decreasing its and surrounding temperature when wet and around to 20-30 Centigrades. He arrived to me because of this blog. I suggested that I was certainly able to figure out a way to simulate the dynamics of the substance but, at the state of art of our knowledge, I was not the right person to talk about because the polyacrylate needed some charcgerisation before I could envision its thermodynamics modelling. Therefore I involved a  colleague, Rosa di Maggio, for getting the work done.  The result is this paper, in which I learned a few things. First of all that phases of matter are not that well defined as I believed initially. Secondly that water can form compounds when it is not free. That cannot be considered exceptional findings but made me to reflect that neglecting water chemical bounding can bring to mistakes. 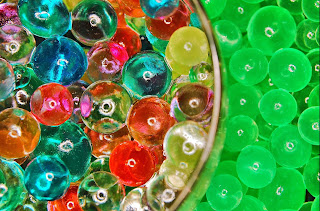 The paper can be found by clicking on the Figure above (from Britannica) you get the paper. Its abstract reads: "Super-adsorbent polymers have the capacity to immobilize huge quantities of water in the form of hydrogel, thanks to their confguration. A commercial sodium polyacrylate (PA) was analysed as such and at diferent water uptakes, indicated through the weight ratios PA:H2O. The hydrogels were prepared using diferent type of water (tap, distilled and deuterated) and characterized by Infrared and Raman spectroscopic analyses, nuclear magnetic resonance experiments, CHN elemental analysis, measurements of thermal conductivity and difusivity. All the measurements were done in order to assess applications of PA:H2O gels as Thermal Energy Storage systems for improving thermal performances of building envelope through passive solar walls. It has been observed that the behaviour of the hydrogels depends both on temperature and water content. In certain conditions such as low weight ratios, a spontaneous and quick cooling of the hydrogel could be observed. The curves of heat fow and average specifc heat (cp) were determined as a function of temperature in order to investigate the states of water in PA hydrogels. When a few water molecules are present, they are mainly and strongly bonded with carboxylate groups. Increasing the amount of water, greater shells of solvation around ionic groups form and water molecules can even interact with neighbouring non-polar hydrocarbon groups. At very high amount of water molecules, they are much more involved into H-bonds among themselves, rather than with PA, so that water pools form into the links of polymeric network. Bulk-like water can freeze and melt. Whatever the amount of water in the hydrogel, its thermal capacity is higher than dry polymer, because the heat can be absorbed by the continuous desorption of water from polymer to bulk-like water (watergel→waterliquid), which can evaporate as temperature approaches 100 °C (watergel→waterliquid→watervapour)."

Next will be to envision a theory for the behavior shown. A glimpse of it can be found on this note.
Posted by About Hydrology at 9:53 AM