Meledrio, or a simple reflection on hydrological modelling - Part III

Well, this is not exactly Meledrio.  It starts a little downstream of it. In fact, we do not have discharge data in Meledrio (so far) and we want to anchor our analysis to something measured. So we have a gauge station in Malè. A gauge station for who does not know it, measure just water levels (stages) and them convert to water discharge through a stage-discharge relation (see USGS here). Anyway, a sample signal is here:

The orange lines represent discharge simulated with one of our models (uncalibrated at this stage). The blue line is the measured discharge (meaning the measured stage after having applied an unknown stage-discharge relationship, because the guys who should did not gave us it). But look at little more closer: 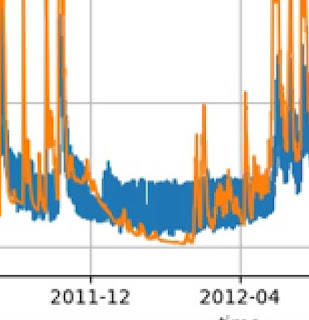 We could have provided a better zooming, however, the argument of discussion is: what the hell is all that noise in the measured signal ? It is natural ? It is error of measurements ? Is due to some human action ?
Having a better zoom, one could see that that signal is almost a square wave going up and in few hours, and therefore the suspected cause are humans.
Next question: how can we calibrate the model that does not have this unknown action inside to reproduced the measured signal ?
Clearly the question is ill-posed and we should work the other way around. Can we filter out in the measured signal the effect of humans ?
Hints: we could try to analyze the measured signal first. Analyzing actually could mean, in this case, to decompose it, for instance in Fourier series or Wavelets and wipe away the square signal (a hint in hints), reproducing an "undisturbed signal" to cope with.
Then we could probably calibrate the the model to the cleaned data. Ah! You do not know what calibration means ? This is another story.

P.S. - This is actually part of a more general problem, which is measurement treatments. Often we, naively, treat them as true values. Instead they are not and should pre-analyzed for consistency and validate before. MeteoIO is a tool that answers to part of the requests. But, for instance, it does not treat the specific question above.
Posted by About Hydrology at 9:16 AM