Meledrio, or a simple reflection on hydrological modelling - Part I

The problem is well explained by the following figure, which represents the statistics of slopes in Meledrio basin. 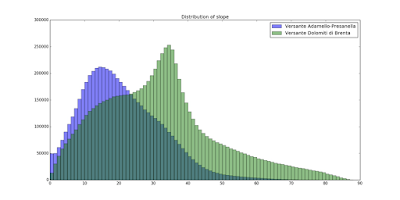 The overall distribution is bimodal, that make us to suspect that something was going on. In fact, this below is the Google view of the basin. 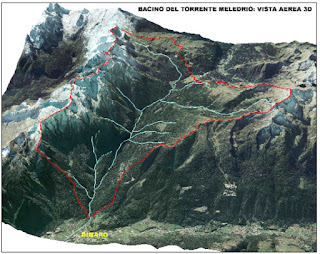 It clearly show that the hydrographical right side of the basin (on the left in figure) is the one that has steeper slopes, and the left side the one that has the lower ones. This is definitely shown by the slope map 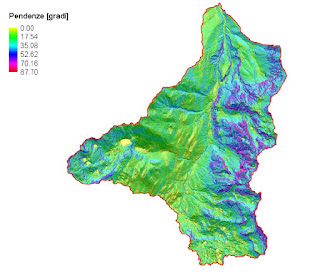 (Please observe that the map is reversed with respect the Google view, since there we were looking to the basin from North). Different slopes, would be associated in our mind with different runoff and subsurface water velocities. This would clearly be accounted for in a model like GEOtop but not (at least explicitly) by a system of reservoirs, especially when we calibrate all the reservoirs all together. A possible partition of the basin in the Jgrass-NewAGE system is represented below 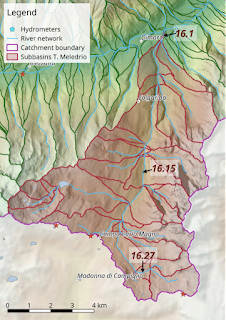 Because the single Hydrologic Response Units are mostly on one side of the catchment, they could be said to be in a area which is homogeneous from the point of view of slope statistics. Therefore, when we treat it as a collection of reservoirs, in principle we could parameterise them differently, according to their slope. In practice, however, we do not have enough measurements to be able to do this separate calibration and we look at the basin homogeneously.  Are we not missing something ?
Well, we are. The first thinking would be to try to add to our reservoir the knowledge gained from geomorphology, and assume that the mean travel time, or some relevant parameter connected to it, depends proportionally to (mean) slope (or some of its power) and inversely to the distance water has to across to get out of the HRU. This is obviously possible, and maybe we could easily try it.
In general, however,  hydrologists who are not stupid, do not care of it. Why ? The reasons can be that our assumption that slopes count is blurred by the heterogeneity of the other factors that concur to form the hydrologic response. However, the magnitude of the heterogeneity can be different at different scales and could be really nice to do some investigations in this direction.
Posted by About Hydrology at 11:36 AM