Nothing really original in this post. I just recollect what already said in the FosterOpenScience web pages. Their definition is:

"Open Science represents a new approach to the scientific process based on cooperative work and new ways of diffusing knowledge by using digital technologies and new collaborative tools (European Commission, 2016b:33). The OECD defines Open Science as: “to make the primary outputs of publicly funded research results – publications and the research data – publicly accessible in digital format with no or minimal restriction” (OECD, 2015:7), but it is more than that. Open Science is about extending the principles of openness to the whole research cycle (see figure 1), fostering sharing and collaboration as early as possible thus entailing a systemic change to the way science and research is done." The wikipedia page is also useful. 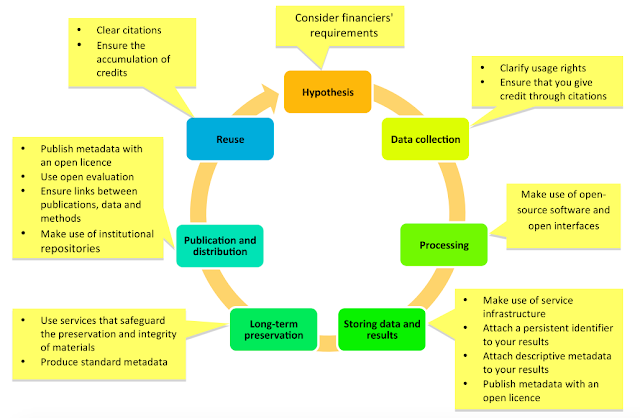 This approach get along with the one of doing reproducible research which I already talked about several times. I do not have very much to add to what they wrote, but I also want to make you note that "there are in fact multiple approaches to the term and definition of Open Science, that Fecher and Friesike (2014) have synthesized and structured by proposing five Open Science schools of thought" .

In our work a basic assumption is that openness require also the appropriate tools, and we are working hard to produce them and use those other that make a scientific workflow open.
Posted by About Hydrology at 2:30 PM