Monday's discussion on evapotranspiration - Part I - The vapor budget

Last Monday at lunch, I and my students discussed about evapotranspiration. I already talk about it in various comments here. However, the starting point was the impression, coming from one of my student that the topic of transpiration is still in its infancy. I agree with him and I offered my synthesis.

There is no difficult to recognize that control volume is limited in our case by the open atmosphere and the surfaces that are emitting vapor as consequence of  their thermodynamics. There is also no difficult to recognize that such limiting surfaces can be very complicate, as those of a canopy, for instance, which is also varying in shape and form with time. Out of these surfaces comes a vapor flux which is dependent on the thermodynamics and physiology existing below them, the holes in number and distribution through which the vapor is emitted, the water availability (and dynamics) in the storage below the surface and, last but not least, the vapor content in the control volume which, as in Dalton’s law commands the driving force. 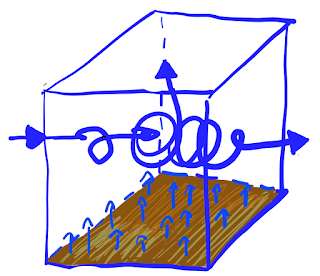 It is not easy actually to account well for all of these factors. We can, maybe, for a single leaf. It is more complicate for the canopy of a single tree. It is even more difficult for a forest. Unless some goddess  acts to simplify the vapor budget, over the  billions of details, and reduces all to some tretable statistics (we can call this statistics the Holy Grail of evapotranspiration - or the whole Hydrology itself)

Assume we can deal with it, and  we have the fluxes right. Then the vapor budget seems cristalline simple to obtain, the variation of vapor in the control volume is given by the incoming vapor flux, minus the outcoming vapor flux, minus, in case, the vapor condensation. The good old mass conservation. Unfortunately, also the output flux is not that easy to estimate, because the transport agent is atmospheric turbulence, which is affected by the non-linearities of Navier-Stokes (NSeq) equations, and its interactions  with the complex boundary represented by the terrain/vegetation surfaces. All of this involves a myriads of spatio-temporal scales and degrees of freedom which are not easy to simplify. Therefore, literature treats the evaporation as a flux, forgets the real mechanics of fluxes and simplifies turbulence according to similarity theory, essentially due to Prandtl work at the beginning of the last century with the additions of Monin-Obukhov theory.  However, in real cases, the hypotheses of similarity theory are easily broken and the velocities distributions are rarely those expected. All of this makes largely unreliable the transport theory applied in a pedestrian way (as we do). See References below and here a quite informed lecture to get a deeper view.

Summarizing,  the transport is complicate because turbulence interacting with complex surfaces is complicate (probably would be better to say "complex"). Numerically is a problem whose solution is still open (a full branch of science, indeed), and we do not know how to model the rustling of leaves (“… and the icy cool of the far, far north, with rustling cedars and pines).
In fact, the models we use for what we usually call potential evapotranspiration, are an extreme simplification of the wishlist.

Finally, the above picture forgets the role of air and soil temperature (thermodynamics). We were thinking, in fact, only to the mass budget and the momentum budget (the latter is what NSeq is),  but there is no doubt that evaporation and transpiration are commanded also, and in many ways, by the energy budget. Turbulence itself is modified by temperature gradients, but also water vapor tension which concurs to establish the quantity of water vapor ready to be transported at vapor emitting surfaces. A good news is that energy is conserved as well, but this conservation includes the phase of the matter transported (the so-called latent heat). So necessarily, in relevant hydrological cases, we have to solve besides the mass and momentun conservation, the energy conservation itself.

Looking for simplified versions of mass, momentum and energy budget, would require a major rethinking of all the derivations and new impulse to proper measurements that, however, some authors already started (e.g., for instance Schymansky, Or and coworkers,  here).

Posted by About Hydrology at 12:58 PM