Gianluca (Botter) in his review of Marialalaura (Bancheri) Ph.D. Thesis brought to my attention the paper Benettin et al. 2017. A great paper indeed, where a couple of ideas are clearly explained:


The paper is obviously relevant also for the hydrological contents it explains, but it is not the latter point the one which I want  to argue a little. I want here just to argue about the way they present their first equation.

SAS stands for StorAge Selection functions and they are defined, for instance in Botter et al. 2011 (with a little difference in notation) as:
$$
\omega_x(t,t_{in}) = \frac{p_x(t-t_{in}|t)}{p_S(t-t_{in}|t)} \ \ \ (1)
$$
as the ratio between the travel time probability related to output $x$ (for instance discharge or evapotranspiration) and the residence time probability.
In the above equation (1) 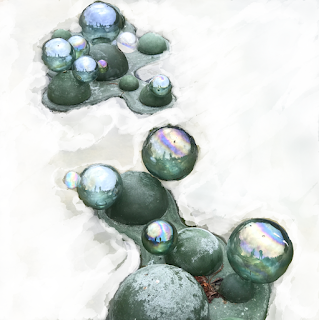 Note:
Benettin et al., 2017 redefines the probability $p_S$ as “normalized rank storage … which is confined in [0,1]” which seems weird with respect to the Authors own literature. In previous papers this $p_S$ was called backward probability and  written as $\overleftarrow{p}_S(T,t)$. Now probably they have doubt we are talking about probability.  In any case, please read it again: "normalized rank storage … which is confined in [0,1]”. Does not sound unnatural is not a probability ? Especially when you repetitively estimate averages with it and comes out with “mean travel times”?Operationally, it IS a probability. Ontologically the discussion about if there is really random sampling or not because there is some kind of convoluted determinism in the travel times formation can be interesting but it brings to a dead end. On the same premised we should ban the word probability from the stochastic theory of water flow, that, since Dagan has been enormously fruitful.

This long circumlocution,  looks to me like the symbol below 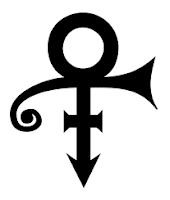 or TAFKAP, which was used by The Artist Formerly Known As Prince when he had problems with his record company.
In any case, Authors should pay attention in this neverending tendency to redefine the problem rather beacause it can look what Fisher (attribution by Box, 1976) called mathemastry. This is fortunately not the case of the paper we are talking about. But then why not sticking with the assessed notation ?

The Authorea version of this blog post can be found here.

Posted by About Hydrology at 2:09 PM