It is a proposal internal to UNITN but it involves so many different disciplines and Departments that represent a variety that normally can be found only in EU projects. Please below, find the abstract of the project, while we cross the fingers for its approval. 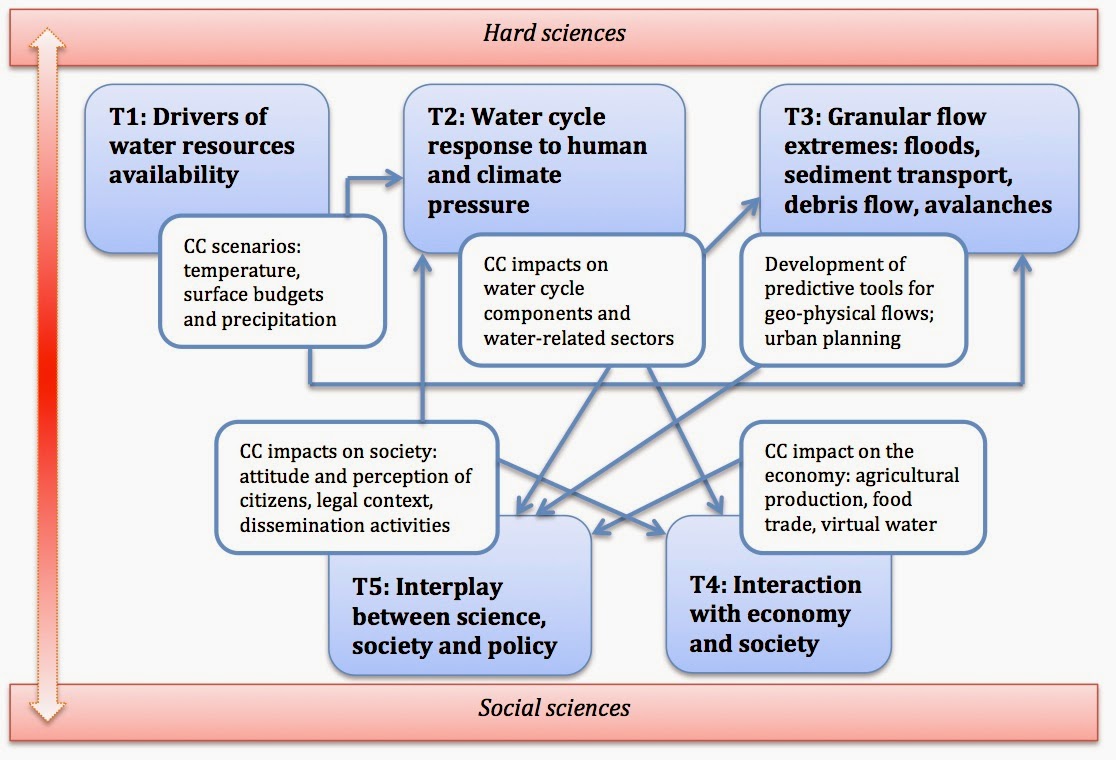 The pressure of human activities on the earth system, including the water cycle, is multifaceted and intrinsically interlinked with climate change due to the inherent complexity of natural and human processes. The interaction of humans with the environment is strongly non-linear and is dominated by multiple feedbacks and non-stationarities, which are difficult to identify and assess. Despite these complexities, the existing tools to deal with the many hazards connected to the interaction of humans with the environment are based on simple approaches, founded on the concept that the earth system is in a steady state, so that predictions on its evolution can be safely made either statistically, or through simplified models founded on the hypothesis the processes are stationary.
This proposal focuses on the interactions between climate change and human activities related to water, with a holistic view embracing physical, social and economic processes. It will consider, in particular, changes in water cycle components related to extremes and their implications in contiguous sectors. Here extremes include floods and land instabilities triggered by extreme precipitations, such as debris-flows and snow avalanches, but also different stress factors threatening the integrity of freshwater services, with adverse effects on agriculture, tourism, and energy production. New paradigms, approaches and tools will be developed in order to cope with the non-stationarity of water cycle processes and to study the entanglement between the physical processes and human activities. The proposal is interdisciplinary also regarding the physical aspects, and involves interaction between water related disciplines, such as climate science, meteorology, hydrology, fluid mechanics, and information technology for aspects related to distributed monitoring. Because of the challenges that climate change imposes, there is a need to increase general awareness of climate-related risks, and find ways to mitigate the impact on economic activities as well as to adapt to new scenarios. For mitigation and adaptation strategies to be effective, knowledge of the physical aspects of the water cycle should be combined and complemented with knowledge of social and economic processes that crucially affect the use and management of freshwater. Furthermore, it should consider that national governments, on the one hand, and the European Union, on the other, have started to enact laws aimed at countering the effects of climate change. The implementation of these measures and their harmonization with existing laws, however, is not without problems. This might require some legal creativity – and the interaction of law with other hard- and social sciences – to bring about effective results.

Climate change mitigation and adaptation require substantial changes in production and consumption patterns, as well as in individual behaviors. This is particularly true for water- related sectors, which are a linchpin in the production of beverages, food and energy, and for many recreational activities. However, in economics, estimates of water resource availability are rarely made on a solid quantitative basis. Also, the systematic preemptive estimation of extremes caused by hydrological events is a science in its infancy. The recent advances in hydrology and water related sciences open interesting perspective for new methods and models to support a better informed decision making process at all levels, from local to national and international. Moreover, societal and economic concerns receive only marginal attention in the debate [1]. Arguably, the gap between science, society and policymakers undermines the decision-making process.

The interdisciplinary approach of this project, which combines insights from hard sciences with sociology, economics and law, represents an important step towards bridging the gap between science and society, and raising awareness of the benefits of cooperation between disciplines. The project studies the complex interplay between physical and human processes in controlling the distribution, in space and time, of water resources by considering both actual and possible future climatic and societal scenarios. The project is organized in five interconnected Tasks (Figure 1): Task 1 evaluates the drivers of water resource availability; Task 2 assesses climate change and human impacts on water resources and local hydro-geological extremes (underestimated according to a report by WMO [2]); Task 3 addresses the development of suitable tools for describing and modeling environmental granular flow extremes and sediment transport; Tasks 4 and 5 aim for better management of water resources, specifically, Task 4 uses the paradigm of virtual water to assess the regional impact of the food trade, while Task 5 tries to envisage effective societal responses to climate change.

A full description of the project, financed by UNITN5, can be found here.

Posted by About Hydrology at 6:07 PM