I had from WRR editor, Prof. Praveen Kumar the list of highest cited Water Resources Research Papers, one of the best  Journals in the Hydrological field. I asked to have this ranking in order to have another way to select and and papers to my collection of historic and benchmark papers for Hydrology.
I was not actually expecting an answer from Praveen but it cames (and I realized later that this record is easy to obtain having a WEB of SCIENCE and SCOPUS account) Results were stored in a file that you can retrieve here.

Being the most cited does not necessarily means being the best papers. Some very good papers could have been published very recently, and still not having enough citations to rank among the first ones. Some very good  papers could be too specialistic to be read by most of us fluency.  Besides some topic are of more broad interest than others, and this increase their citations' rates.  However, after all of these disclaimers, here there are the papers, some statistics, and comments. The paper grouped, for broad sub-fields, are about:

The dominance of groundwater papers is apparent, but this is probably a inheritance of the lated eighties and nineties. While browsing the recent papers there is more equilibrium between the fields covered.

Grouped for year of publication, the are distributed as shown below. 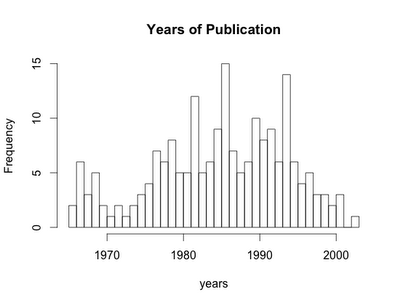 The figures shows that they cover all the decades of publication of WRR from 1965 to 2003.

Grouped per decades these 201 paper are

So, the 20 higher cited papers are (the other can be seen in the xls file):

- SUDICKY, EA, A NATURAL GRADIENT EXPERIMENT ON SOLUTE TRANSPORT IN A SAND AQUIFER - SPATIAL VARIABILITY OF HYDRAULIC CONDUCTIVITY AND ITS ROLE IN THE DISPERSION PROCESS,1986, cit:645

- Tarboton, A new method for the determination of flow directions and upslope areas in grid digital elevation models, DG, 1997, cit: 477

Reading the list of these paper is apparent that the first ones belong to a interdisciplinary area of interest that cover hydrology, soil science, and, at least, agricolture.  The inverse modelling is also a pretty relevant topic, while surface hydrology is not present (except for Tarboton's paper, which however is on DEM treatment): which is a surprise to me! 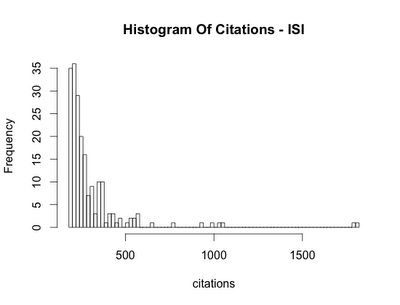 The mean number of citations is around 300. So, a high cited paper, at least for WRR should have around 200 citations (unfortunately, my papers are still away from this).  A summary of the statistics is:

The ten most recent papers among the most cited are:

- Rodriguez-Iturbe, I, Ecohydrology: A hydrologic perspective of climate-soil-vegetation dynamics,   2000, cit: 213

Neither between these appears a paper on surface waters. However, it is interesting to note that the topics covered are different from those of the highest cited papers. Meaning probably that each decade has its focus. 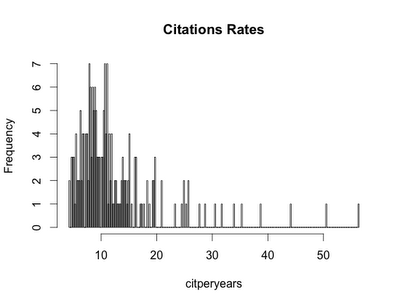 Yearly citations rate show that the first group of papers are really outliers with respect to the others. However the mean number of citations per year is around 12, and if your papers has more that 5 citations per years, there is some hope that sometimes in the future it could enter in this rank.

The ten papers with the highest annual average citations' rate are:

Finally, the authors who wrote these papers are 337. Most of them appear once. Those who compare more than two times are:

I must say that I know most of the Authors, many of them personally, since their work inspired mine, and just by googling their names it is clear that some of them gave some exceptional contribution even in other journals. So despite the many disclaimer citations say something. Someone of my hydrological heroes is missing: but doing benchmark papers is probably is slightly a different thing than writing a highly cited paper.

Posted by About Hydrology at 11:57 PM