This paper must be read after its companion on rainfall published in Atmospheric Research. There we were concerned with rainfall estimates over the large areas of Upper Blue Nile (UBN). Here we move on to estimate all the other components of the water budget. A similar goal was searched at small scales and with different tools, in this other paper about Posina catchment. So the paper can be considered sort of complimentary and covering a range of possibilities allowed by the JGrass-NewAGE system.


The paper abstracts reads:
"The Upper Blue Nile basin is one of the most data-scarce regions in developing countries, hence, the hydrological information required for informed decision making in water resources management is limited. The hydrological complexity of the basin, tied with the lack of hydrometerological data, means that most hydrological studies in the region are either restricted to small subbasins where there are relatively better hydrometeorological data available, or at the whole basin scale but at very coarse time scales and spatial resolutions. In this study we develop a methodology that can improve the state-of-art by using the available, but sparse, hydrometerological data and satellite products to obtain the estimates of all the components of the hydrological cycle (precipitation, evapotranspiration, discharge, and storage). To this scope, we use the JGrass-NewAge system and various remote sensing products. The satellite products SM2R-CCI is used for obtaining the rainfall inputs; SAF EUMETSAT for cloud cover fraction for proper net radiation estimation; GLEAM for comparison with estimated ET; and GRACE gravimetry data for comparison of the total water storage amounts available. Results are obtained at daily time-steps for the period 1994-2009 (16 years), and they can be used as a reference for any water resource development activities in the region. The overall long term mean budget analysis shows that precipitation of the basin is 1360 ±230 mm per year. Evapotranspiration covers 56% of the yearly budget, runoff is 33%. Storage varies from minus 10% to plus 17% of the budget. " 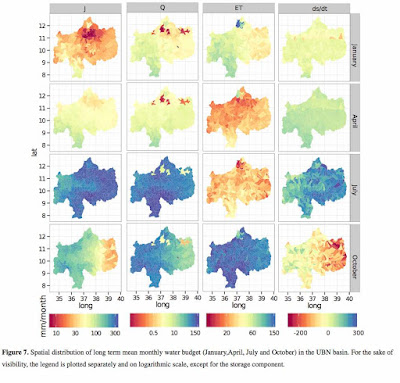