Which Hydrological model is better ?

The talk below (you can click also on the image) is about the GEOtop and JGrass-NewAge models, their physical bases, their informatics based on older (the first) and new (the latter) programming paradigms, the lessons I learned in building them with my group of people in an academic environment, their future, and the understanding that there is no the best model, but certainly a better way to do models. 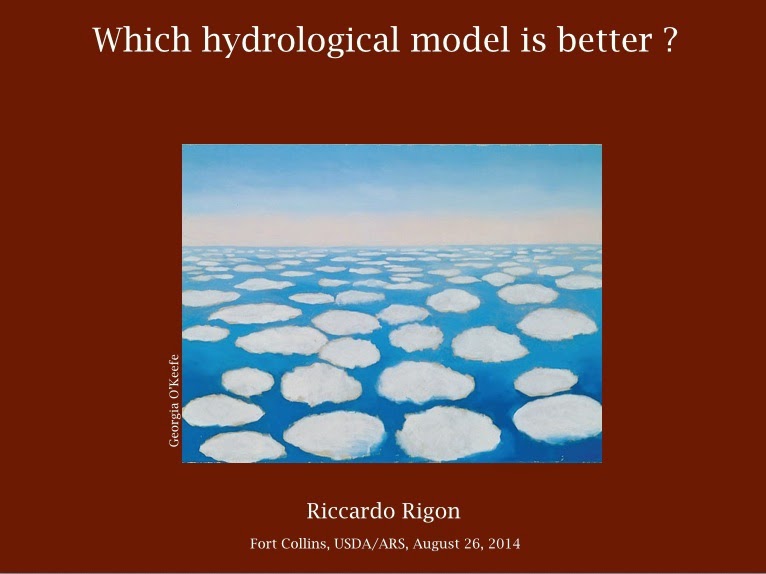 Hydrological modelling was for long time, and still is, almost a synonym of simulating rainfall-runoff. Recently, however, the scope of hydrology became wider, even among engineers. Modelling in hydrology now certainly still means modelling discharges, but also modelling snow, evapotranspiration and turbulent exchanges, and surface/subsurface interactions. With the goal of reproducing the whole picture of the terrestrial hydrological fluxes, my coworkers and I worked together in the last decade to build new models and new types of models. We started from the lesson by P. Eagleson, and we built first the process-based (grid based) GEOtop model. GEOtop is “terrain-based” (it is based on the use of digital terrain models and uses the knowledge of interaction between morphology and process) “distributed” (all the simulated variables are calculated for each pixel of the basin) model of “the water cycle” (it simulates all the components of the water cycle, accounting for both the mass budget and the energy budget, the two budget equations being coupled through the temperature of the soil, which controls evaporation, hydraulic conductivity, and accumulation of the snowpack).  However, this GEOtop was intimidating many, either for the complexity of the processes described and its internals, and possibly not apt at large scale modelling where faster solutions are required.

Therefore we also worked on a different, more parsimonious model, called JGrass-NewAGE. From the lesson learned by implementing and maintaining GEOtop, we also found necessary to build the new model on new informatics. This system sacrifices process details in favour of efficient calculations.  It is made of components apt at returning statistical hydrological quantities, opportunely averaged in time and space.  One of the goals of this implementation effort was to create the basis for a physico-statistical hydrology in which the hydrological spatially distributed dynamics are reduced into low dimensional components, when necessary surrogating the internal heterogeneities with "suitable noise" and a probabilistic description. Unlike other efforts of synthesis, JGrass-NewAge keeps the spatial description explicit, at various degrees of simplicity.  This has been made possible by opportune processing of distributed information which, in this way, has become part of the model itself.

As a conclusion modelling remains a "liquid" practice where various needs must be fulfilled  each time we face a new problem (if science is driven by problems and not tools). Therefore an infrastructure that makes of this fluidity its center is necessary. This is the reason we adopted OMS3.
Posted by About Hydrology at 4:40 AM