Dino Zardi sent to me and some other colleagues, a small synthesis WRF and LES which you can find below

Introduction to Large-Eddy Simulations (LES) with the Weather Research and Forecasting (WRF) model,

The Weather Research and Forecasting model (WRF, Skamarock et al., 2008) is a numerical weather prediction model used for both operational and research applications at scales ranging from regional to large-eddy simulations (LES). Several planetary boundary layer (PBL) parameterization choices are available in WRF, which are intended for use in cases in which the horizontal grid resolution does not enable the representation of three-dimensional turbulence (resolution coarser than 1 km). For simulations requiring higher resolution to capture evolving three-dimensional turbulence or flows in complex terrain, a LES is more appropriate. LESs explicitly resolve large turbulent eddies, whereassome portion of the turbulence (below the filter imposed by the computational grid) must still be modeled using a sub-grid scale (SGS) model. There are different options in WRF to model SGS turbulence. In the first option eddy viscosity coefficients are determined using a 3D Smagorinsky turbulence closure from deformation and stability, whereas in the second option a prognostic equation for turbulent kinetic energy (TKE) is used, and eddy viscosity coefficients are based on TKE. Finally, another approach to model SGS stresses in WRF is the nonlinear backscatter and anisotropy (NBA) model of Kosović (1997), (see Skamarock et al., 2008 and Kirkil et al. 2012 for further details). 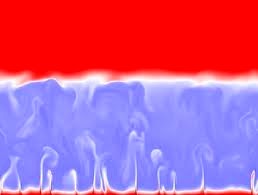 WRF (in LES mode) calculates horizontal and vertical diffusion in physical space.
Several issues arise when performing LES simulations, and in particular LES simulations nested in mesoscale domains, for which the flow contains essentially no resolved turbulence. To this regard several authors provided recommendations that should be followed. As discussed in Mirocha et al. (2010), the aspect ratio, or ratio of the horizontal grid size to the vertical grid size, can strongly impact the accuracy of an LES. They found that aspect ratios between 2 and 4 are ideal for neutral boundary layer flows over a flat plate, but the authors pointed out that different results may be expected in situations with more complex terrain. Then it must be remarked that the grid spacing used in the LES domain must be << than the energy-containing eddies, to resolve large eddies. This recommendation may be a constraint in stable atmospheric boundary layer (ABL), when the expected large eddies are of the order of 10 m. Finally, one of the most important issues arising when coupling an LES with a mesoscale model is the spin-up of turbulence at inflow boundaries, as it is discussed also below.
Moeng et al. (2007) pointed out that WRF can be a reliable tool to perform real-world LES. In fact WRF uses real world terrain and land use data as well as real atmospheric conditions. In order to test the performance of the two-way nesting capability for LES in WRF, the authors performed LES-within LES simulations, where one LES was nested within the other. Promising results were obtained with the alteration of the SGS stress model, the careful selection of the nest size, and the use of a relaxation zone close to nest edges. A similar investigation was carried out by Mirocha et al. (2013), who in particular analyzed errors arising at nest interfaces by changes in mesh spacing from a coarser domain to a finer domain, using different SGS models. They found significant discrepancies in many parameters between the nested simulation and a single-domain simulation, concluding that extensive buffer zones, whose extension depends on the SGS model used, are required for equilibration of flow parameters on nested domains. Moreover the authors stated that vertical nesting, which is not present inthe current WRF release, would likely improve the results. Both Moeng et al. (2007) and Mirocha et al. (2013) pointed out that nesting an LES inside a mesoscale model would pose a much bigger challenge than nesting a finer LES within a coarser LES, due to the different ways to treat turbulent motions and due to turbulence spin-up problems when prescribing an inflow into the LES domain from the mesoscale model, whose flow is laminar by construction.
This problem was analyzed in detail by Mirocha et al. (2014), who highlighted that, despite mechanisms for downscaling from mesoscale to LES are present in several models (including WRF), little information exists regarding conditions under which this approach is appropriate. In particular the authors compared the development of turbulence between LES nested within mesoscale domains and non-nested LES. They found that, under relatively weak forcing conditions, turbulence generally develops too slowly in LES nested within mesoscale domains. Moreover they found that nesting a fine LES domain within a coarse LES gave better results than nesting it directly within the mesoscale model, as turbulence can begin to develop in the coarser LES.
Applications of nested LES within mesoscale domains using WRF in real test cases are provided byLiu et al. (2011) and Talbot et al. (2012). Liu et al. (2011) tested WRF-LES in a nested mesoscale-LES configuration for wind power applications down to a resolution of ~100 m. Four coarse domains were run with mesoscale model settings and continuous data assimilation, while two finer mesh domains were run with LES model settings. The model results, compared with wind farm anemometer measurements, were found to capture many intra-farm wind features and microscale flows. Talbot et al. (2013) tested the skills of WRF-LES in nested real-world simulations using six nested domains, with a resolution of 50 m in the inner domain. The three largest domains were run with mesoscale model settings, while the three inner domains were run with LES model settings. The performance of the model was rather poor in simulating wind speed and direction, while better results were found with respect to air temperature. Several sensitivity tests highlighted that the most important controls on model results were the meteorological forcing data, which are downscaled by WRF and significantly impact also the smaller domains. In particular the errors in wind speed and direction in the mesoscale simulations were largely passed on to all LESs, which were unable to correct them. On the other hand it was found that the mesoscale horizontal turbulence closure and the LES SGS model had a relatively small impact on results. Finally increased resolution improved the ability of the model to capture surface variability, but did not improve regionally averaged results or bulk atmospheric boundary layer properties.