Tha Alpine Convention is an international treaty between the Alpine countries (Austria, France, Germany, Italy, Liechtenstein, Monaco, Slovenia and Switzerland) as well as the EU, aimed at promoting sustainable development in the Alpine area and at protecting the interests of the people living within it.  It embraces the environmental, social, economic and cultural dimensions.
The following slides (in Italian) clarify the structure of the Convention and try to delineate the way the Water Platform works from  a couple of seminars that Andrea Bianchini gave here in Trento last week. Here the Wikipedia page. 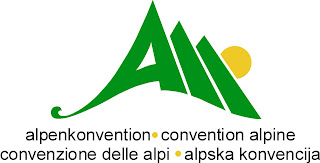 For 2013 and 2014, under the Italian Presidency of the Convention, I will be the president of the Water Platform. The official mandate for 201-2014 of the platform has already stipulated among the participants  (you have a synthesis on slideshare): you can have in Italian (an official version) and an unofficial version in English (english is not among the languages of the Alpine Regions).
The official website of the platform is here.
Posted by About Hydrology at 12:31 PM