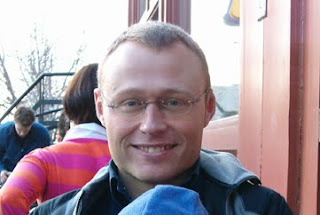 Stuart was concerned about the connectivity of the river network and to understand how the upstream connectivity affects the downstream hydrology. His message is that restoration or actions taken in a certain position of a river network can easily cause an apparently random result if the information deriving from the netwok connectivity is not accounted for. But, obviously, his arguments have the main focus on the ecology of rivers which is differently affected by the connectivity. Conceptually a step forward.

Here it is Stuart's abstract on his seminar: Catchment organisation and the flux of water and material

"In this seminar I will think about the importance of understanding catchment organization in terms of the functioning of watersheds. Tracer studies have told us, for many years, that catchments organize themselves - the signals that go in to a basin (e.g. rainfall, eroded soil) look very different to those that come out (e.g. river discharge, suspended sediment concentration). But, we have made less progress in understanding the spatial structure that leads to this organization, something that is crucial to prioritizing what to do where in river catchments. I will begin by presenting new ways of modelling this structure, and then show what this might mean: (1) for flood generation; (2) for the effects of land management upon diffuse pollution; and (3) for the watershed organization of salmonid populations. I will conclude by noting that critical to progress in this area is new forms of hydrological conceptualization and the development of innovative experiments to test such ideas."

Stuart's Papers are almost innumerable and can references be found here. At least two are of interest of the discussion we had in Trento:

and the invited commentary on Hydrological processes:

In the mood of "thinking different" also this paper can bring some interesting information:

Posted by AboutHydrology at 3:37 AM