which I do not have time yet to comment broadly (post should be considered a stub). In the last two months Roger Moussa, Stuart Lane, and Marco Borga came and gave a seminar in Trento. The topic were all centered about the river catchments but everyone of the lecturer had a different accent.
Here it is a little of summary of Moussa talk. 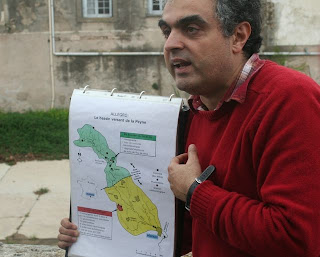 Roger was mainly concerned with agricultural catchments, and their peculiarities. There were two or three themes to enlighten:
- agricultural catchment derives from a deep intervention of the natural hydrography, and this obviously affects the hydrological response. In one of his paper he does some virtual experiments in which he compares the hydrologic response of the real catchment with the supposed natural one.
- the variation of hydraulic properties of soil after tillage, and in general, after the agricultural practice. - the role of vegetation, epitomized by a banano cultivation, in preferential collecting the rainfall.

Here it is the abstract of Roger's seminar: Model calibration and analysis of model performance :Case of distributed hydrological modelling of flood events from the plot to the catchment scale.

"During the last decades, flood events which occurred in the Mediterranean zone are a major threat to human life and infrastructures. This situation handicaps development, necessitating the use of modeling approaches for prediction of sites prone to flooding, planning of damage minimization activities, and for environmental prediction of the impact on runoff, erosion and pollutant transport. Moreover, hydrological processes are largely variable in space due to human impact in agricultural and urban zones, causing hydrological discontinuities such as channels, field limits, drains, and tillage practices. MHYDAS (Modélisation HYdrologique Distribuée des AgroSystèmes / Distributed Hydrological Modelling of AgroSystems), a physically based distributed hydrological model, was especially developed to model flood events taking into account hydrological discontinuities. Application cases are shown on catchments from the plot scale (1000 m²) to large scales (2000 km²) in various agro-hydro-climatic conditions : i) to assess the optimal subdivision into sub-catchments for distributed hydrological modeling applications; ii) to study the spatio-temporal distribution of rainfall and the soil hydrodynamic properties; iii) to define a parameterisation strategy, and to compare various multi-objective functions and analyze the significance of well-known criteria functions."

With Roger we actually discussed a little more about other issues regarding the topic of comparing data and simulations.  Some considerations derived:

- Discharge data ata should always be checked independently from the outcomes of the model.  To verify their correlation structure, and their statistics, i.e. lag times (discharges from rainfall), centroids, time to peak, volumes, runoff coefficients, etc.

- Be conscious of which data you really use, and distinguish model also for their use of data: do they use vegetation information ? Soil information ? What is really distributed in your catchment data set ?

- Do not use excess of distributed information that you cannot justify.

- Keep in mind which are the objective of your modeling. Improving discharge prediction ? Improving calibration methods ? What else ?

- Do not give for granted that the first period in a data set is the calibration one.  Sometimes invert calibration and validation !!!

- Always use  objective indicator of godness of fit (GOF): but be aware that they can hide some important features, and the best GOFs performances not always means a bette prediction (Roger has a paper on it).


Finally he also, as well as me, felt the need for an infrastructure to support modeling. His institution promote Openfluid, a C++ framework.

Moussa R. 2008b. What controls the width function shape, and can it be used for channel network comparison and regionalization?. Water Resources Research, 44, 20 p., W08456.

Moussa R. 2010. When monstrosity can be beautiful while normality can be ugly: assessing the performance of event-based flood models. Hydrological Sciences Journal, 55(6), 1074 – 1084.


Bibliography of others will follow. Anyone of them is a champion in publishing. So there is lot to read.
Posted by AboutHydrology at 12:24 PM