Where do channels begin ?

It is the title of a famous paper by David Montgomery and Bill Dietrich about channel initiation which appeared in Nature, in 1988, and was followed by a subsequent paper (in 1994 on Water Resources Research): and BTW by many others in the following years to confirm, and using their findings.

So we know much more than then about. However, those pioneering contribution, did refer to what happens in sloped but hilly environments, of Oregon and California. What about the Alps ?

Recent work by Paolo Tarolli brought some quantitative light on the issue. He presented his work at last January Cathy meeting that can be summarized as follows:

-the availability of very detailed laser scanner of topography allows a great opportunity to use objective methods to single out channels' head.
- in a region of the Italian Alps (Dolomites) were surveyed at least two main processes that drive channel initiation: i) channel heads formed essentially by surface runoff (mass wasting, in form of debris flows or "more traditional" erosion), ii) and areas where geology and groundwater seeping upward exercise important controls on channel initiation.
- Wavelet analysis allows to smooth the topography the right way to use in sequence "curvatures" for channels head initiation. 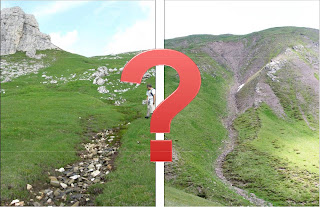 I hope it will not pass to much time before we can bring these tools inside our jgrasstools.

For who is interested, relevant papers are listed below: