Concentration time, if existent, is a statistical concept


Among the various times we use in describing the catchment, concentration time is one of them. It is referred, in the old textbooks, as the largest travel time of water parcels (i.e. statistically significant amount of water molecules that are though to move together) in a catchment. Travel time, in turn is the time a parcel of water employs to across the catchment from its injection (as rainfall) to its exit (as part of discharge). The Figure 1 below illustrate two parcels with different travel times, with parcel 1 arriving faster to the outlet, for being close to it. 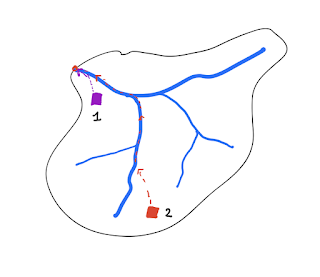 The concept of concentration time gained its importance since the Mulvaney theory of "the rational method" reported, for instance,  in K. Beven book (2012). For giving a meaning to it, we can assume that,  if parcels are though to move with constant velocity in a catchment, then, once their distance from the outlet along the drainage directions (see the width function concept) is known,  travel times is obtained by dividing  that distance by the parcels’ velocity.
Rigon et al., 2016 gives a review of this concept in the framework of the geomorphological unit hydrograph based on the width function (or WFIUH). The oldest hydrologists would also remind a simplified version of the story, where, essentially the catchment is seen as a rectangular planar hillslope and the flow is though to be parallel as in Figure 2 below. 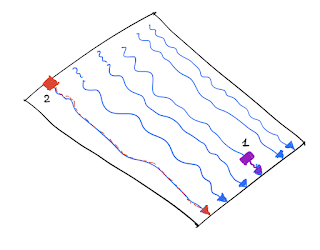 Parcels move in essentially rectilinear paths, with constant velocity. Parcels like the no  2 are on the divide and parcel like the no 1 very close to the outlet, that is in Figure 1 a sort of trench. In this case, varying the duration of precipitations, we obtain a hydrograph  which is a triangle or a trapeze. It can be demonstrated that when a rain of constant fixed intensity falls on this catchment, we obtain the maximum discharge possibile when its duration equals the parcels no2 travel time, the largest one. Continuing to argue about models, not about what happens in reality, it can be seen also that, from the point of view of the instantaneous unit hydrograph theory (IUH),  concentration time is the extension of the domain of definition of the IUH distribution function ($t_c$  in Figure 3). 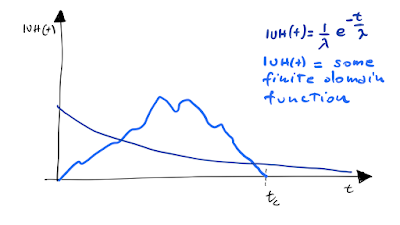 Unfortunately, most of IUHs do not have a finite domain but an infinite one, the simplest being probably the exponential IUH $$IUH(t;\lambda) = \frac{1}{\lambda} e^{-t/\lambda}$$ (see also Rigon et al., 2011). This implies that for most IUHs, the concentration time does not exist as a rigorous concept.   Besides, the dynamics of water parcels as depicted in simplified theories was completely screwed up by tracers experiments that have determined that the age of water in floods is very much larger than believed, and usually what we see in rivers and torrents is old water not the one just fallen during the last precipitation (though undoubtedly was the rainfall to trigger it).
The concept of concentration time,  resists in operational hydrology because there is a certain evidence that floods are generated by precipitations of increasing duration with increasing basins area,  and this correlates with the idea of concentration time exposed above for the planar hillslope.  However,  in complex catchments, it cannot be something different from a statistical concept. We already mentioned briefly that a catchment is not a huge planar hillslope and that water parcels move in complicate ways through it.  Moreover, the expansion of the river networks during storms (e.g. Durighetto et al.,  2020)  implies the necessity to add a further dynamic to concentration times perceptual model.

After all the above considerations, if something like the concentration time exists, it is a characteristic statistical time which identified the duration of the rainfalls that generate the  largest peak discharges. It should depend on catchment size and topology (besides on the rainfall). We believe that it increases with catchment size, but being any catchment different, it remains a slippery concept. A solid statistical study would be required to clarify, once for all, the issue.