Starting from some philosophy I try to give an idea of what a scientific model is, on the example and limitations of the Galileian approach. I claim that hydrology is mostly a science where you have to move away from experiments and you have the deduct the models from observations more than experiments. This introduces some difficulties and arrive to the arrive to the conclusion that we do models of the data and models of the models of the data. Because of the presence of multiple phenomena interacting, hydrology gain a space in the science of complexity. But yet we do not know how to characterize it, if we do not use the classical mechanics and/or the usual thermodynamics. As a matter of facts, we have to deal with an entire zoo of models born with different scopes and evolved sometimes erratically.But at this point is where we do stand. 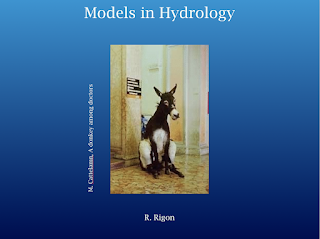 Please find the slides here, and the YouTube video where I comment them here.  I also makes a little summary of the talk here.
These slides can ideally be followed by those I used during the 2020 GEOframe Winter School:

Posted by About Hydrology at 9:44 AM