We already talked about water budgets, and the papers of ours that deals with it (see below). Because in this Fall AGU meeting there was a dedicated session, we presented an abstract:

Recently we presented two papers one dedicated to the estimation of the water budget components in a small, basin, the Posina catchment [Abera et al., 2017], and the other in a large basin, the Blue Nile [Abera et al., 2017b]. Closing the budget in the two cases was different. Worth to say, it was much more difficult to close the budget at Posina, since at the large scale satellite platform can reasonably help to validate the results. At the smallest scale ground measurements usually available do not guarantee the closure of the budget without making additional hypothesis and remote sensing data cannot give very much help.  The hypothesis that we made is that the groundwater storage comes back to the initial level after a certain time, that we called Budyko time, TB. This time can be fixed arbitrarily, for instance, to five years and then varied to assess, through these trials the uncertainty of the budget. The large scale case was largely supported by remote sensing data, instead, either for calibration and/or validation. This contribution explains how we actually did, clarifies some aspects of the informatics necessary to obtain it and openly discusses the issues risen in our work. We also consider varying configuration of the water budget schemes at the subbasin level, and how this affects the estimates.
Finally we analyse the problem of travel times [e.g. Rigon et  al., 2016a, Rigon et al, 2016b]  as it comes out from considering the multiple fluxes and storages and discuss how much they can be realistic. All considerations and  simulations are based on the JGrass-NewAGE system [Formetta et al., 2014] and its evolution presented in Bancheri [2017]. 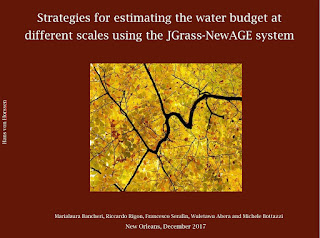 As we say in the presentation, we could not talk about the travel times. However there are several other places where you can find about, here.
Clicking on the above Figure, you will see the presentation that was used in NewOrleas. However, on Youtube, we uploaded an extended version with comments.