Representation of space (and time) is a necessary step to implement any Physics. However, the topic is seldom faced with the appropriate generality, and this reflects into implementations in softwares that do not have a general structure. This is the rational for talking here about meshes or grids.
From a quick view of the material found in literature, it appears that a lot of work has been done, by few people (group). There are at least two pathways to follow. The first is the Ugrid mesh specification. We can describe it as the classification work of mesh by power users, i.e. people who use meshes for describing (especially environmental) numerical problems. Their work is concentrated on semantics and explaining what the mesh are,  with the scope to insert them in NetCDF, a self explaining file format conceived to contain environmental data.
The second approach, in Berti (2000) starts from more fundamental mathematical work which is also used in Heinzl (2007, but referring to the paper Heinzl, 2011, could be convenient).
In general, the first two chapters of Berti’s dissertation are a must-to-read for those who deals with scientific computing.
A subsequent number of papers cover two topics: how to store mesh in databases and how to give to these structures the right flexibility to be parallelized. Interestingly some of the mathematical work actually flowed into the creation of C++ libraries, in particular the GRAL libraries, developed by Berti himself. 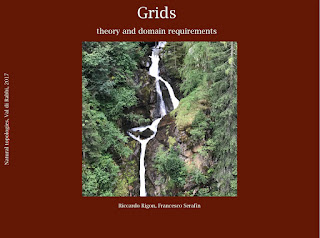 Browsing around, mesh are rigorously defined in Algebraic Topology (e.g. Hatcher, 2001) and this was  recognized in various papers, since the sixties (e.g. Branin, 1966, and references therein). A general discussion, which involve the nature of Physical laws, was produced by Tonti (2013) and somewhat pushed also by Ferretti (2015).  These treatments could bring in the matter some new insight and the general understanding. What we did with the slides was to try to synthetize some of the above work, especially in view of an implementation of some Java libraries. The idea suggested by the readings was to use generic programming, design patters (Gamma et al, 1994, Freeman et al., 2005) and programming to interfaces (which BTW we already have in mund: we found what we were looking for).
But the detail of the implementation will be the topic of a future post (but you can have a glance to literature browsing the bibliography below). Now get (a little of) theories by clicking on the figure above.

Some of my  students asked for somewhat a milder introduction to algebraic  topology.  I dedicated a new short post to it.

Posted by About Hydrology at 7:07 PM