Water, energy and carbon balance of a peatland catchment in the Alps

When I started the enterprise called GEOtop, it was at this kind of studies that I was thinking, where experimenters meet theoreticians and/or modeler. In this case, we are studying a small peatland on a plateu on top of Monte Bondone, one the mountains close to Trento. It is usually overlooked in favour of the great dolomites we have all around here. However, it has its beauty, and I can tell you that it is a pleasure to walk over there and see its flora, in summer, or skiing there in winter. 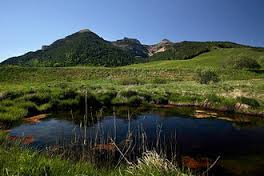 This paper deals with the water budget of the biotope of the plateau, and its carbon cycle. The paper used measurement campaign, laboratory analysis and accurate modelling that push to the limit of GEOtop capabilities.

The paper, entitled: "Water, energy and carbon balance of a peatland catchment in the Alps "by Jeroen Pullens et al.,  has this abstract: " Over millennia, peatlands have stored around 30% of the global soil organic carbon.  Peat is formed and accumulated due to the slow decomposition rate of organic matter in the waterlogged, anaerobic soils. Therefore, the understanding of the water cycle of peatlands is important in evaluating the functioning of peatlands. To be able to study  these dynamics, the process-based hydrological model GEOtop and an appropriate set of in situ measurements were used. They were functional to simulate 4 years (2012- 2015) of the water and energy dynamics of an alpine catchment in Italy, which included a peatland. The modelled energy fluxes are comparable to the fluxes  measured by the on-site eddy covariance tower. The modelled water cycle was used  to quantify the loss of dissolved organic carbon (DOC) and to calculate the carbon balance of the peatland. The model outcomes showed an overall good fit with the  measurements during the snow-free period. During snow cover, the model had difficulties simulating the soil temperature due to insulation by the snow. Based on the measured DOC and the modelled discharge, the DOC adds another source of carbon, since the presented peatland is already acting as a carbon source based on  carbon fluxes. The total amount of loss of DOC (10.2 (± 3.8) g C m-2 yr-1) is comparable to other peatlands. In total, the peatland had a carbon balance (CO2, CH4 fluxes and DOC losses combined) of 112.3, 273.8, 190.8 and 95.3 g C m-2 yr-1 for 2012, 2013, 2014 and 2015 respectively.  "

You can find the pdf of the manuscript by clicking on the figure above.

Posted by About Hydrology at 6:42 PM