Celerity versus velocity and the travel time problem

A little of introduction

Velocity of a fluid is the variation of its particles' position with time. Celerity is the speed at which a signal (a wave) is transmitted through a medium. Velocity of particles determines flows (fluxes) out of a control volume. Celerity, as we will see, modify the particles' velocity field (intensity and extension).

Jeff McDonnell (GS), and Keith Beven (GS) (J&K) with their nose for interesting topics, recently wrote  a paper where they discuss the role of the two quantities with reference to travel time problems. Some other papers (e.g. Kirchner, 2016,  Hrachoitz et al, 2013) echo the same problem.
One important point that Beven and McDonnell discuss is that transport of properties (passive tracers) depends on water molecules velocity and therefore between transported properties (like temperature, water isotopes, water age) and flow (assumed to be dominated by celerities) there can be various discrepancies.


Travel time, $T_r := t-\tau$ is described in literature by its probability $p(t-\tau|t) $, where $t$ is the actual time,  $\tau <  t$ is the injection time and $p(t-\tau|t)$ is the travel time distribution conditional to the actual time.  For details about travel time distribution, residence time and life expectancy of water particles, please take the time to read this paper. Implicitly, it is assumed that the probability is evaluated at the closure (boundary) of a control volume.  The distribution represents the ensable distribution of infinite random experiment that regards the motion of a single molecule or, after the hypothesis of ergodicity, the distribution of the travel time of a bunch of molecules, which are injected together in the system, in different positions.

Actually J&K argued about the mean travel time $<T_r >_t$ more than of its distribution. $<T_r >_t$ definition is:

J&K (and the other papers) said that $<T_r >_t$  is affected both by velocity and celerity but I do not think they went right to point. One central fact is that, as follow from Botter et al., 2010, 2011, discharge is estimated through a different probability distribution function, which is $p(t-\tau|\tau)$, conditional on injection time:

where $Q(t)$ is the total outflow from a control volume and $J(\tau)$ is the precipitation input. Therefore the breakthrough curve (the backward probability) and the fluxes are not, usually,  linearly related.
$p(t-\tau|\tau)$ and $p(t-\tau|t)$ are not completely independent and are related by the Niemi's relationship. 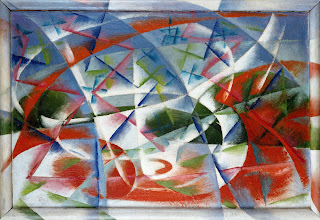 Back to the basics

Let’s me re-discuss the topic from the scratch. When we have a velocity field, $u(\vec{x},t)$ in a fluid it can be either stationary or time varying. Assume it is stationary. Then:

which implies that $u(\vec{x},t) = u(\vec{x})$, i.e. the velocity field, does not depend on time, and it is called stationary. Does it imply that forces do not act ? No. Forces act, because still we can have gradient of velocity:

So, when the we follow a particle moving (the so called Lagrangian view of fluid motion), it is locally accelerated, and it feels a force. However, forces do not change in time and are subject to stationary resistances (dissipation) that do not allow for the overall system to accelerate (increase or decrease the total kinetic energy).
If a second particle is injected in the same place of the first one, it will have the same travel time. Particles (parcels, molecules) injected in different points will have different trajectories, all stationary, and the overall distribution of of travel times for a bunch of particles injected together (or, BTW, at a different time) is not time varying. It has to be remarked that the fluxes that come out from such a velocity field is not constant but reflect the mass (volume) of particle injected in the fields. Furthermore, we can say what is going in, will go out in a certain composition of ages which  is relatively easy to disentangle from the knowledge of the spatial field and the amount of injected matter.
In the above case no net energy is transferred and we do not have to invoke celerity but just velocity. Also,  the integrated probabilities of which we talked at the beginning is: $p(t-\tau|\tau) = p(t-\tau|t) =p(t-\tau)$, i.e. the probabilities are time invariant and not conditional to something.

Now, assume we have a time varying velocity field, so that $u=u(\vec{x},t)$ and:

This implies we have acceleration in (usually) many points which must be generated by a local force (which has to be time varying). The way to obtain it in a fluid is to generate a time-varying pressure gradient (yes, excluding time varying gravity, time varying electromagnetic fields, time varying applied work, time varying temperature or density gradient etc. , all things we usually not deal with in our hydrological problems). Actually it can be shown that these pressure variations, once imposed, can travel from one place to another (in ways that are different in different phenomena: see J&K for the enumeration of some cases) so that this pressure variation is the cause of the varying velocity field. The speed of these travelling pressures is the celerity we (and J&K and others) are talking about. Conjointly with velocity field variations, fluxes in previously unaffected portion of the control volume can be activated (in some part of the control volume particles can start to move or some part of the control volumes are invaded by new moving particles).
Therefore the distribution of particles’ travel times is affected in two ways: by mobilising water (and/or enlarging the sectional area) and by increasing (locally) water velocities.
From the above analysis is also evident that the phrase "celerity (of pressure waves) affects flows" is true, but in an indirect way, since flow is affected by velocity field and its spatial extension (no less, no more), but both are modified by pressure waves (the causal reason).

Consequences on the mean travel time

In the case of time varying velocity fields, distribution of the mean travel time can vary in time because the new activated areas can contain water of ages different from those activated previously, and because locally the velocity of water can increase (or decrease) at the passage of the pressure wave.
The latter effect can skew the distribution of travel time (to smaller or larger travel times), but unless the variation is such that the whole the control section is affected (which can be the case), it has not significant effects on the mean travel time, which is an integrated quantity.

Due to time variation in the velocity field, when we inject two water volumes in the same place at different times, their travel time is different, and consequently, any transported quantity is transported differently. The travel time distribution $p(t-\tau|t)$ is therefore time-variant, and we can attribute this variation to the effect of celerity, meaning that there are pressure waves propagating in the control volumes.  In my view this is a necessary and sufficient condition (mathematically speaking) but we can discuss how inputs variations affect water field velocity and special cases (mostly ideal ones) when the existing flow fields is just extended but not modified where previously existing.

Well, the velocity field is not superimposed, but caused by the quantity of water itself.

So far we discussed the cause of  varying velocity fields which I suggested was due to pressure waves. These, in case of water flow are usually generated by variations of the water amount itself. The velocity field, in fact, is not something independent of the water quantity and distribution and, on the contrary, depends on it. So when we inject water, we cause pressure waves that propagates with a law dependent on the medium: at the surface, in the vadose zone, or in the ground. (Therefore the idea of a stationary flow field with varying water inputs is not, in general, a credible assumption. It can be an approximation to take with care).

I think there is no mystery in all of it.

I realised that what I wrote was overlooking the normal view (and problems) researchers in the field have about travel time distribution.  The reference is the beautiful (a must read) work Dagan, 1984 cited below. Dagan and followers observe that there is diffusion and, moreover, stationary velocity field can be very heterogeneous.  I forgot diffusion, and, whilst accounting for the second, I did not stressed enough the consequences of heterogeneity on travel time distributions.  For this, the reading of Dagan's paper can be enough.  What I said, however, remains true.