Rainfall on the Blue Nile

Assume you want to forecast the discharge and the hydrological cycle of a large African river.  Meteorological stations are just a few in a wide area, and gauge stations too, indeed. So what to do,while attending that more measurements are made ?  Simply you have to use satellite data. This paper, by Abera et al., deals with the analysis of five satellite data and analyse their reliability in the Blue Nile region.
Among the five there is the innovative product by Luca Brocca SM2RAIN which infers precipitations from the soil moisture analysis. 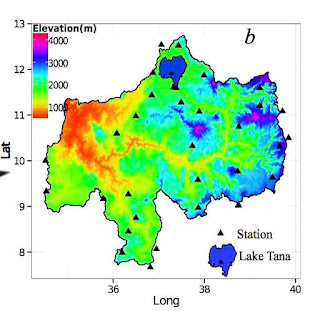 "In a region where ground-based gauge data are scarce, satellite rainfall estimation (SREs) products are a viable option for proper space-time rainfall characterization. However, their accuracy and performances vary from region to region, and must be assessed. In this study, five high resolution satellite products (TRMM, CMORPH, TAMSAT, SM2R-CCI, and CFSR) are compared and analysed using the available rain gauge data in one of the most topographically and climatologically complex regions, Upper Blue Nile basin. The basin rainfall is investigated systematically, and it is found that, at some locations, the difference in mean annual rainfall estimates between these SREs could be as much up to 2700 mm. Considering three goodness-of-fit indexes, correlation, bias and root mean square error (RMSE) between the SREs and ground-based gauge rainfall, CMORPH, TAMSAT and SM2R-CCI outperform the other two. TAMSAT has the highest (91%) detection skill for dry days, followed by the CFSR (77%). For lower rainfall values, CMORPH, TAMSAT and CFSR show a higher accuracy index than SM2R-CCI and TRMM. On the contrary, the SM2R-CCI has the highest accuracy index for medium rainfall ranges (10-20 mm). In addition to the identification of the best performing products, the study tried to determine the bias correction of the estimates. A confusion matrix is used to investigate the detection ability of satellite rainfall products for different rainfall intensities. The empirical cumulative distribution (ecd f ) mapping technique is used to correct the SREs intensities distribution. This method provides a means to improve the rainfall estimation of all SREs, and the highest improvement obtained is for CMORPH (from -70% to -4%). "

A presentation (here) on the same topics of the paper was given at the 10th Alexander von Humboldt EGU Topical Conference held in Addis Ababa,  this 18-20 November.

The page where the complimentary material for the paper can be found is here.

Posted by About Hydrology at 3:45 PM