In the days in which General relativity celebrates its first one hundred years (I believe the paper was published Dec 2 1915), I want to talk about energy conservation, which is a topic relevant to general relativity and to hydrology too.

“One of the founding principle of Thermodynamics is that energy is always conserved. It can be transformed in one form to another, but it is never created or destroyed (but see below). The first principle of Thermodynamics was given something like in its modern form by Robert Mayer (see also here) in the 1840s -shortly before the concept of energy, as we understand it, was introduced into science. Mayer, a German doctor, became intrigued by the observation that the blood  he was letting from the veins of feverous sailors in the Dutch West Indies was considerable redder than he has would expected (read the full story in the Oliver Morton’s book, the entertaining lecture for a hydrologist, I am using here)” … Mayer deduced the the sailors were using less oxygen than expected due to the warmer climate and was brought to the conclusion that respiration in animals was a specialised form of combustion (which was a common, but not universally accepted belief among the chemist’s contemporary to Mayer).  “However, Mayer decided that the total amount of heat generated in the body must be equal to the capacity of generating force latent in food. Mayer was subsequently lead to  look at the sun, and he arrive to argue that sunlight was the sustenance from plants and  these of animals. Plants were converting energy from light to a chemical form.”
Other famous scientists were subsequently working on energy conservation law, and maybe you associate the law with the name of Joule. 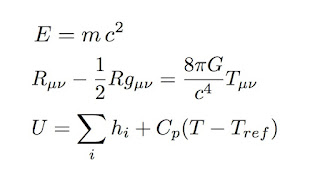 Therefore the early discovering of the energy conservation is extraordinarily close to what modern hydrological studies pursue, especially now that the food-climate-water nexus is at the center of entire research programs.

A famous finding  of Albert Einstein is the equivalence of energy and mass. This looks like an exotic property, but it is actually always present in hydrological thermodynamic: what else is the “latent heat” if not an explicit statement that mass (and forms of its arrangements, the phases) is a form of energy ?
Since water on earth and in the hydrological cycle changes phase, water energy budget must account for mass transfer.  However, because also mass, besides energy, is conserved,  energy equation  is greatly simplified.
If mass conservation is given for granted in hydrology (but not always completely accounted for: because people focuses more -erroneously - on the fluxes), energy conservation is rarely considered. Our GEOtop is one of the few models that does it, and considers energy conservation together with mass conservation (and the budgets, not just the flows!) with an appropriate level of complexity.

Going back to the main argument, what was an experimental achievement for Mayer, became, after Emmy Noether, a Swiss mathematicians a property connected with the symmetry of the mathematical structure of Mechanics (and Electromechanics indeed) when presented in Lagrangian of Hamiltonian form. Noether’s theorems simply state that if the Lagrangian (Hamiltonian) - either classic or quantistic - of a certain system is invariant under a group of transformations, this implies a conservation law. Energy conservation is, in fact, implied by invariance in time of the Galilean physics, while, for instance, momentum conservation is implied by invariance under space translations (and angular momentum is conserved because of invariance under rotations of the reference frame).  Special relativity does not alter this situation so, in special relativity, mass, energy and momentum are conserved, as well as in Galileian/Newtonian mechanics.  The new ingredient in Special relativity is that space is not separated by time, but both are connected. So, actually the above conservation laws are all connected (and the first of the three equations in the figure says part of it).

However, the one hundred years old second equation of the figure states that the stress tensors (a sort of generalisation of energy, that compares in the second member of the equation, please see Wikipedia) is strongly connected with the geometry of space. So, at large, energy, mass, time, space, matter are all connected, but energy is not conserved in the Universe (and BTW also some arguments about the thermodynamical death of the University are not very solid).  Please find a more detailed and technical explanation here; another explanation here.

Energy is conserved on earth, with great precision (for a Hamiltonian treatment of Earth's fluid mechanics, please refer to the Salmon book, or his paper), and studying the arrangements of matter is important in hydrology. For us it is an approximation that works, and it is very stupid not to use it.
When accounting for it obviously we have to deal with both kinetic and potential energy, but also internal energy has a big role, especially when we arrive to talk how liquid water becomes ice, or water vapour or viceversa, which continuously happens.  The third equation in Figure reminds it, being mass hidden in enthalpies, and in thermal capacity (for general references to Thermodynamics see here).

The game becomes thermodynamic also for Hydrology and, actually, the third equation just gives a flavour of it, because when phases are involved, also their interfaces  and their mixing must be taken into account: otherwise we do not understand how drops form, or water is retained in vadose soils, or how it freezes, or how flows in plants.

But these are stories for another day.

Posted by About Hydrology at 9:07 AM