Did you care about the mass conservation, as expressed by the continuity equation ?

Evapotranspiration can be seen as a mass budget. Therefore, from this point of view, the above equation must hold. However we are not used to see it in its complete form. Usually in fact, the gradient of velocity is simply neglected. Or the other way around.  Whatever of the two, one could think that the right answer to the budget would come, obviously, to solve the Navier-Stokes (NS) equations for getting the velocity field to substitute inside the equation.

But, this is not exactly the case. Precisely, to solve NS equations (numerically, clearly), we would have to put some boundary conditions at the bottom of the domain, i.e.  the water, the soil or the leaves, and this would be, hundred per cent, a no slip condition where velocity is null. As a matter of fact, if velocity would be null, we would have no flux of water vapour, implying that our deployment of the problem has something wrong. First consideration is that what we actually care is not the (mean) velocity of air but the mean velocity of water vapour itself and, while the (mean) velocity of air molecules at the boundary is null,  the mean velocity of water vapour molecules is not null cause to entropic forces, and set by the diffusion process. So, even at null (mean velocity), we have to introduce in our computing a Neumann (flux) condition based on some (non-equilibrium) thermodynamics. 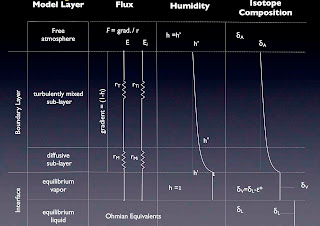 If we are not going to solve appropriately the NS equation we can think to simplify the question substituting appropriate averages of the velocity field, for instance assuming that the flux is diffusive at the bottom (close to the surfaces) and logarithmic above, as derived from information of the Figure. This scheme has a long history and can be traced in the book by Brutsaert (1980).

In either of the case, the interesting thing now is how to estimate the flux at the bottom from thermodynamics. A starting point for the investigations of these fluxes in the Einstein theory and the Teorell formula which express these fluxes as function of the chemical potential, and could be, eventually properly upscaled.