What is the minimal geomorphology-based hydrological model?

This is one of the objects of the research Alban de Lavenne, a Ph.D. student of Christophe Cuddenec pursued here in Trento, during his three months stay the last Fall. Similar approaches can be found in the work by Fenicia, and especially in Fenicia et al., 2008. Fenicia 2008, is a must-read paper, since it is well written, and smart. However there, the  Authors did not use any geomorphic information as guideline in their modeling but just a scheme based on reservoirs, which is, in my view, out-of-date. Which is kind of a pity, considering that we know very much of the morphology of river, even when they are ungauged. Thanks to SRTM, ASTER, and other topographic data, the topology and geometry of river networks, and Earth's elevation is known with unsurpassed precision all over the World, and therefore, the first step to predict what happens in ungauged basins would be to use their geo-morphology, which, in fact, was shown to be important in many papers. 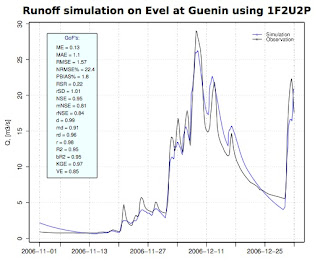 Alban used in his investigation a few simple geomorphological unit hydrograph schemes based on the width function:
In this context, "velocity" can be read also as "mean travel time" since the relation between the two quantities is given by the appropriate lengths measured along the flow paths.

In any case, the poster you can retrieve below the figure (click on the figure) tells it all.
Posted by About Hydrology at 6:20 PM