The geomorphic structure of Peak Flows

It is the fourth of a sequence of papers that started at the very beginning of my hydrological carrier (as from the ISI catalog):

But in these papers, we can possibly include, also: 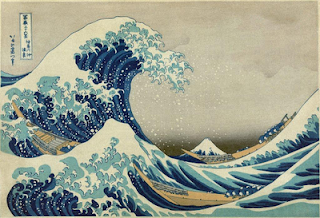 In fact, all began in trying to understand the topology of river networks with the hope, of which we had confirmations, that topology and geometry play a role in shaping the hydrograph. The discover was that the river networks were fractal (we actually learned it from La Barbera and Rosso, 1989, and Tarboton et al., 1988), and the width function has a multifractal imprint.

However, on these structures, the river networks, the signal passing though has its own dynamics which is advective but also dispersive. How dynamics interacts with geometry? In the first paper on geomorphological dispersion we showed that geometry usually dominates hydrodynamics. So, a precise account for hydrodynamics is usually not necessary to reconstruct the main features of a hydrograph.

A few year later, however, we realized that our model was a little too simple, since using flood wave celerities in channels were not enough to account for the process. We needed at least to include a further celerity, to account for the travel time of water in hillslopes. This was already clearly envisioned at least by Bras and van Der Tak, 1990 but we introduced it in the formalism of the Geomorphological Unit Hydrograph. Besides, we investigated more the role of dispersion. Getting the signal of an ideal uniform rainfall can we solve the reverse problem of understanding the form of the basin which generated a given hydrograph ? While without diffusion and dispersion we were able to statistically reverse the signal, i.e. obtaining basin shapes very similar to the original one, increasing diffusion makes any effort more and more difficult, until the complete loss of any detailed information. However, we were able to characterize diffusion influence on the moments of distribution, and showed that the average residence time is not affected at all by dispersion (therefore it maintains the imprinting of the topology and geometry of the river network) and gave a formula for the second moment of the hydrograph. Works cited in the Peak Flows paper report subsequent research on topic by Saco and Kumar (see References), and by Botter and Rinaldo. Later on, Botter and Rinaldo, 2010 moved also to study the recession curves.

BTW one of the open questions, actually a missing link for completing the whole picture was the inclusion in the picture of a runoff generating mechanism, since all our consideration were essentially based on the assumption that we were able to single out an "effective rainfall", i.e. that part of the precipitation that produces the flood hydrograph. We attacked this problem in D'Odorico and Rigon, 2003 where we implemented a completely saturation excess theory of it, and showed how the extension of partial saturated areas affect heavily the hydrologic response, and therefore the estimation of any residence time statistics (during the writing we found that Sivapalan, Beven and Wood, wow, already tried it in the old-fashioned IUH theory). 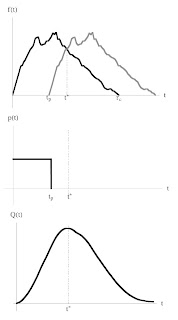 What about the peak flows ? Here it comes the present paper:

This paper develops a theoretical framework to investigate the core dependence of peak flows on the geo- morphic properties of river basins. Based on the theory of transport by travel times, and simple hydrodynamic characterization of floods, this new framework invokes the linearity and invariance of the hydrologic response to provide analytical and semi-analytical expressions for peak flow, time to peak, and area contributing to the peak runoff. These results are obtained for the case of constant-intensity hyetograph using the Intensity-Duration-Frequency (IDF) curves to estimate extreme flow values as a function of the rain- fall return period. Results show that, with constant-intensity hyetographs, the time-to-peak is greater than rainfall duration and usually shorter than the basin concentration time. More- over, the critical storm duration is shown to be independent of rainfall return period as well as the area contributing to the flow peak. The same results are found when the effects of hydrodynamic dispersion are accounted for. Further, it is shown that, when the effects of hydrodynamic dispersion are negligible, the basin area contributing to the peak discharge does not depend on the channel velocity, but is a geomorphic propriety of the basin. As an example this framework is applied to three watersheds. In particular, the runoff peak, the critical rainfall durations and the time to peak are calculated for all links within a network to assess how they increase with basin area.

Note: I probably forgot some Siva contributions in this story, just do a "Sivapalan" search on the Water Resources Research site to have an idea of his contributions.