Estimating the longwave radiation is certainly a relevant task for any hydrologist who deals  with snow modelling and evapotranspiration (or, BTW, is trying to assess and close the whole hydrological budget).
This paper follows another one, that was written for the shortwave counterpart, which can be found here, and uses the same toolbox of components for calibration and other tasks (see figure below, for instance).  In order to obtain the results of the paper, a new JGrass-NewAGE component was implemented and tested and documented here.
The component and the related material performs a re-parametrization of ten empirical formulas found in literature, and introduces a regression to obtain the parameterizations coefficients in any location, based on those measured in Ameriflux site. 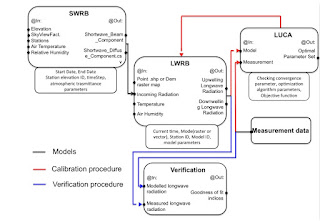 Information on the GEOFRAME site contains also indications for running the components code, and a working example of simulation.
The R script that contains the regression of parameterisations' coefficients be found on GIThub.
The published version of the paper is here.

Posted by About Hydrology at 5:15 PM