JGrass-NewAGE started as a project for Adige River Basin Authority. The goal was to study, besides the peak flows, droughts, and integrating it with a database, a GIS system, still maintaining the possibility to change parts of the whole system at the necessity. Indeed all the ideas expressed in the  GEOFRAME talk
at 2008 CUAHSI meeting.  The pillar on which we wanted to base that effort was also to have open source, multiplatform, software, possibly developed with open source resources.

We chose to use up-to-date software engineering solutions and therefore we looked for developing software by components.  As explained in another posts we first chose OpenMI and eventually OMS v3 as components framework. We are currently happy with this choice and finally the whole system seems to work incrementally. 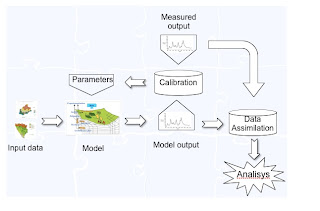 The publication on GMD hopefully speaks by itself about what the system does (but many aspects of this enterprise will be explained in other papers). What we hope that this effort can attract the work of other producers of components to enrich the choices that users can do.

Posted by AboutHydrology at 4:11 PM