I was pleased to be invited to talk at the 2021 Faculty Development Program of the Chandigarh (the beautiful) University in India.  I obviously talk about Water and Hydrology and the provisional title was:

"Science and practice of river basin modelling in the next future. From Hydrology to Informatics and back on four acts" 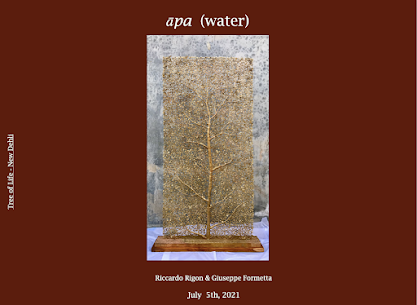 Given the time I have, I decided to divided my presentation in four parts:

As usual I uploaded the slides of my presentation in advance and they will be available later. The talk summarizes other talk I gave during the years, and while getting technical in some parts is dedicated to a wider audience than hydrologists.
Posted by About Hydrology at 9:09 AM No comments:

Email ThisBlogThis!Share to TwitterShare to FacebookShare to Pinterest
Labels: Chandighar

Dennis Baldocchi (GS) is a myth for me, for his knowledge of the processes and issues related to the soil atmosphere interactions, for the wide range of materials he shared with the community and for his efforts in the FLUXNET. So it was a great pleasure when I heard that he accepted to give a talk to our class (held by Mirco Rodeghiero, GS) "Biosphere Atmosphere and Climate Interactions" of the Master in Environmental Meteorology. His talk was very dense and illuminating and, fortunately, he agreed with us to share the videos that are presented here below. 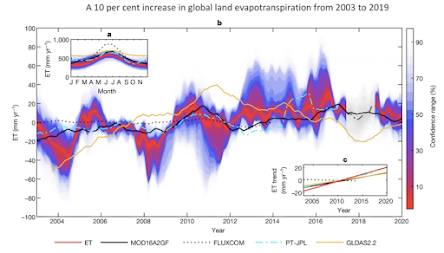 The talk is very dense of suggestion, rich of references and knowledge of the physics of the field and good food for thinking for all of us.  Please find below, the video of the talk and the discussion that followed.
Posted by About Hydrology at 3:19 PM No comments:

Where do we stand with theory, tools and methods and where to go with applications 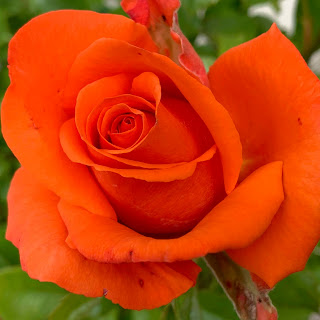 HDSys (Hydrological Dynamical System studies
A further theoretical effort has to be made to get the main characters of the structure of such types of models pushing as far as possible the use of tools commons with other branches of science, like environmental science, chemical reactions, cell biology, theory of populations, system and control science, spreading of diseases. The rest of the effort has to be done in generalizing the implementation of solvers, in such a way they can be applied seamlessly where they can. The history about how spatially distributed systems can be described as compartmental systems is still to be written but it is the first time in hydrology history we can massively try alternative modelling solutions.
Evapotranspiration and ecohydrology
Prospero model has to be refactored and enhanced with the introduction of the Ball-Berry parameterization. The Rosalia (plant's hydraulic model) model pursued and finally the LysGEO 1D finished. LysGEO 2D should be derived as soon as WHETGEO 2D is stable. Evapotranspiration has to be connected with travel times for the needs of the WATZON project. Simple models of carbon production have to implemented (see HDSys) to interoperate
Soil and Critical Zone
WHETGEO 1D has been made. It needs to be cleaned up and made easier. Systematic tests should be performed against experimental data and its success is tied to this. Future developments should aim to introduce preferential flow in soil by using the clone scheme. Similarly, it is possible to remove the constraint of thermal equilibrium between soil matrix and soil water. The coupling of the water and energy budget should be completed by considering the phase change of water, as well as the modelling of snowpack at the soil surface. Thanks to its robust numeric WHETGEO 1D can be used to investigate the soil celerity deeply. Interesting can be the of WHETGEO 1D with the concept of laterally coupled tiles in which lateral fluxes between interactive tiles are defined through some transport laws. This represents an intermediate solution between WHETGEO 1D and WHETGEO 2D, that we can call WHETGEO 1.5D.

WHETGEO 2D must be cleaned up and brought to the same operability that 1D has. The first step concerns the completion of the coupling between surface and subsurface flows. This is necessary to properly simulate run-off generation processes, and numerically speaking to properly define the boundary condition at the soil surface. A key aspect in WHETGEO 2D is then related to the optimization of the computational cost and in tandem with an efficient strategy to save data. This will require abandoning the netCDF-3 in favor of a more efficient file format.

The extension to 3D simply must be implemented, but we are on the ball.

…all that remains is to play with WHETGEO.
Travel Time and Tracers modelling
The basic theoretical framework has been clarified. Now we have to push it to tracers and systematically apply it to all the the cases. Tracers description has to be added to the whole set of models.
Information technology
OMS has to be cleaned up and brought to work with Java 17 and its building possible with Maven or Gradle. Net3 and intrinsic parallelization has to be improved. GEOframe bottlenecks eliminated for its greater usability. The Github site made more fancy and usable. Maybe all of it should work commanded from Jupyter Notebook. R and Python should be used more extensively for data IO. Classes for teaching programming GEOframe  has to be finally completed.
Applications/Deployments
Po project, Nera work, Ressi modelling, various hillslope experiments modelling have to be brought to an end. Being concentrated on theory, methodology and software, just a little time remains for applications. This does mean that people working with me has to carry applications on their own shoulders, on a larger extent than I do. For what regards me, a decadal objective could be in bringing our tools to work progressively on Po, Adige, Italy, the whole Mediterranean area with an eye to both the water and energy budget (and, forthcoming, the carbon budget) with unprecedented detail and precision.
Overall keywords
Remote sensing - Machine Learning - Information theory- Data assimilation
Slowly but steadily remote sensing and machine learning have to be introduced among the GEOframe tools. We are going to pursue it within a few doctoral efforts. A deeper data assimilation into models is to be seen as mandatory, for the good of modellers and experimenters. New techniques of analysis of data and models outputs have to be deployed ... and so on.
Posted by About Hydrology at 10:19 AM No comments:

What a valuable work is the thesis by Niccolò Tubini, here presented in its draft.  It covers works in hydrology of the critical zone, numerics, programming, software engineering, open science methods. Having a so wide horizon of interest it could  not be easy to grasp in all of these details, but it is well written and, we hope inspiring. As the Author, Ph.D. candidate says: "In the following we suggest that studying the CZ requires tools that are not yet readily available to researchers; then we propose one of our own. These tools should be flexible enough to allow the quick embedding of advancements in science"

Who wants to access the draft, can click on the figure of the Thesis first page below. 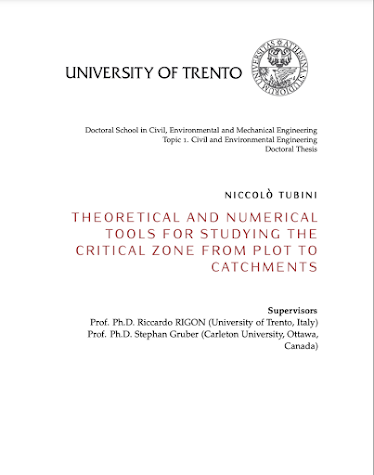 The Thesis included the work present in the two submitted paper by Niccolò,  on The Cryosphere and a second one presented in GMDD regarding WHETGEO-1D.  Whilst a thesis being considered kind of a definitive work, this one remains very much a work in progress with the extensions of the codes foreseen to arrive soon and whose informatics has already been implemented. All the tools developed during the Thesis are open source and freely available both as executable and source codes on Github.  Any comment or suggestion to the  Thesis draft as well as to the papers are welcomed.
Posted by About Hydrology at 7:58 PM No comments:

WHETGEO-1D (Water HEat and Transport in GEOframe) is a physically based model simulating the water and energy budgets in a soil column. WHETGEO-1D is developed as an open-source code, adopting the Object-Oriented paradigm and a generic programming approach to improve its usability and expandability. WHETGEO-1D is fully integrated in the GEOframe/OMS3 system allowing the use of the many ancillary tools it provides. It comes on top of several years of work on engineering software, discussing and debating about Richards equation, taking care of getting appropriate integration methods in a travel that crossed hydrology, mathematics, numerics and software engineering.  Click on the figure below to access the paper. 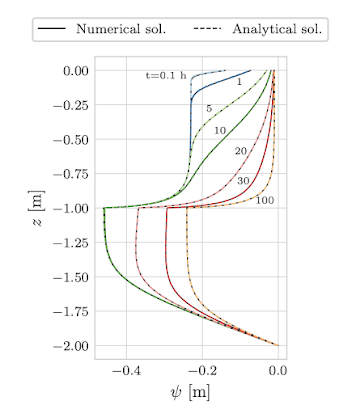 The code is really solid and was throughly tested over the last three year by my students of the Hydrology class and in various applications. Its inputs and outputs can be analyzed by using Python and some standard Notebooks prepared to help the user to do it.  The paper has been submitted to the Geoscientific model development discussions (GMDD) and it is available for discussion to everyone and can be obtained by clicking on the Figure above. Complementary material is present in the GEOframe blog. The paper comes with its software, documentations and test and the GEOframe blog post explains where all of it is. You did a nice job Niccolò Tubini!

Here the discussion paper on GMD.

Posted by About Hydrology at 10:47 AM No comments:

Evaporation and transpiration are the topics more discussed in this blog, due to the interests I grew in the last few years (almost without publishing). However, I believe I collected enough information to be able to summarize a new view on these processes. Certainly shared with others, but not so widely shared, and not already present in other posts of this blog. In this presentation, that I shrinked in less than half an hour, I tried to summarize part of my current knowledge. For complimentary information, please see the lectures I gave at the GEOframe Winter School, or during the class of hydrology I do. 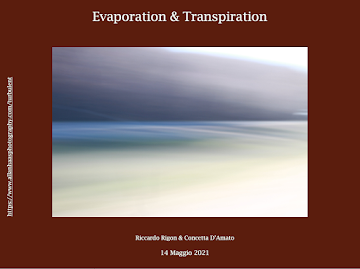 The main result are a complete understanding of what the Penman-Monteith approach is, and that soil evaporation and transpiration can be differentiated from  the computational point of view because of the different dynamics of their energy and water budgets.
Posted by About Hydrology at 10:04 PM No comments: 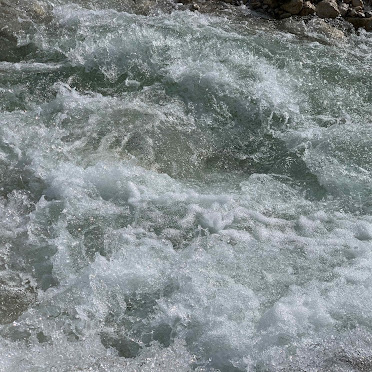 They are in Italian but if international participants will arrive they will be in English. Who is interested can write to abouthydrology <at> gmail.com to have access to the webinars.
Posted by About Hydrology at 12:44 PM No comments: